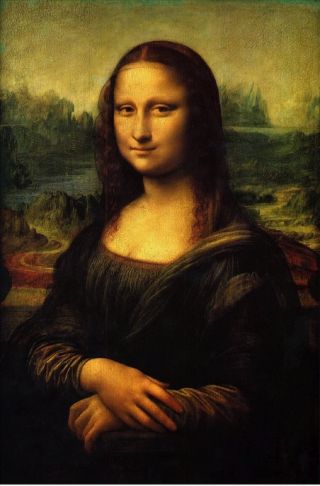 Mona Lisa's smile is often described as enigmatic, but could the mysterious allure of this iconic painting actually be due to an underlying illness in "Lisa" herself?

At least one doctor thinks so. In a Letter to the Editor in the September issue of the journal Mayo Clinic Proceedings, a cardiologist and his colleague take a detailed look at the painting, and speculate that Lisa Gherardini, the subject of the painting, may have had hypothyroidism, or an underactive thyroid gland.

"The enigma of the 'Mona Lisa' can be resolved by a simple medical diagnosis of a hypothyroidism-related illness," Dr. Mandeep Mehra, medical director of the Heart & Vascular Center at Brigham and Women's Hospital in Boston, and his co-author, Hilary Campbell, an executive assistant at the University of California, Santa Barbara, proposed in the letter. "In many ways, it is the allure of the imperfections of disease that give this masterpiece its mysterious reality and charm." [25 Secrets of Mona Lisa Revealed]

Famed Renaissance artist Leonardo da Vinci painted "Mona Lisa" around 1503, according to the letter. It's thought that a wealthy Italian merchant, Francesco del Giocondo, commissioned da Vinci to do the painting of his wife, Lisa Gherardini, after the birth of the couple's child.

In 2004, some doctors hypothesized that Gherardini may have had a condition called familial hyperlipidemia, or high levels of fat (cholesterol) in the blood due to a genetic condition, which led to heart disease. They based this theory on several details in the painting, including skin lesions and swelling in Gherardini's right hand, which may be signs of the disease.

But in the new letter, Mehra and Campbell point out that Gherardini is thought to have lived to be 63 years old. If she indeed had familial hyperlipidemia, it's unlikely that she would have reached this advanced age, given the limited treatments available for the disease at the time.

Instead, the authors think that details in the painting point to hypothyroidism, a condition in which the thyroid gland doesn't make enough thyroid hormones to meet the body's needs. Thyroid hormones affect the body's metabolism, and an underactive thyroid gland can lead to a number of symptoms, including fatigue, weight gain, dry skin, muscle weakness, pain or swelling in the joints, thinning hair and, yes, high hyperlipidemia, according to the Mayo Clinic. The condition can also lead to a yellowing of the skin, as well as goiters, or enlargements of the thyroid gland.

The authors said that hypothyroidism could be a "unifying diagnosis" that would explain many features in the painting, including the subject's apparent yellowing skin; thinning hair and lack of eyebrows along with a receding hairline; a possible enlargement in the neck suggestive of a goiter; as well as the previously suggested symptoms of hyperlipidemia.

Mehra and Campbell also noted that Gherardini had given birth a few months before sitting for the portrait, and pregnancy can sometimes be a cause of hypothyroidism.

If Gherardini was indeed experiencing the effects of hypothyroidism, her famous expression may represent some of the conditions' symptoms, such as muscle weakness and reduced movement "leading to a less than fully blossomed smile," the authors wrote.

Still, it's important to note that there's no way to know for sure if Gherardini had hypothyroidism. There may be other explanations for the features in the painting. For example, her hair loss may have been due to intentional hair removal; and her yellowish skin may actually be the result of age-related changes to the painting itself, the authors wrote. And the famous "Mona Lisa" smile could be due to "da Vinci's experiments with a technique called sfumato, which allows tones and colors to fade into each other without discrete lines," Mehra and Campbell said.

"Certainly, we should also admit that our unifying theory may be as plausible as the multiple explanations provided, each open to individual and collective bias," they concluded.