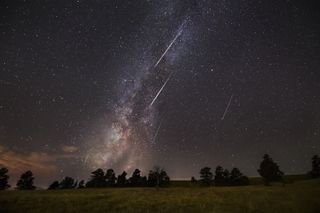 The annual Perseid meteor shower will fill the sky with shooting stars this weekend. For that, you can thank the dirty debris of a very rude comet.
(Image: © Danita Delimont/Getty)

Every 133 years or so, the massive Swift-Tuttle comet careens through our solar system at 150 times the speed of sound, spreading a dirty trail of ice, dust and sundry space schmutz behind it. This weekend, Earth will do its part to clean up that interstellar mess during an annual event we call the Perseid meteor shower.

The Perseids occur every year from mid-July to late August, when Earth passes through the wide band of debris left behind by Comet Swift-Tuttle's various visits to our part of the galaxy. Each time the comet swings by (most recently in 1992), it drops trillions of tiny pieces of itself into our inner solar system. Most of these little specks of metal and stone are as small as grains of sand, but that doesn't prevent them from flashing across the night sky when they collide with Earth's atmosphere at about 133,200 mph (214,365 km/h).

The resultis one of the most dazzling meteor showers of the year — and the best time to watch it is this weekend.

On Sunday night (Aug. 12) and into early Monday morning (Aug. 13), Earth will push through the densest band of the Swift-Tuttle debris cloud that our planet has access to. And if you find yourself looking up into the sky in a clear, dark place, you could see from 50 to 100 meteors zipping through the sky every hour, according to NASA. [Crash! The 10 Biggest Impact Craters on Earth]

The good news for stargazers this year is that the moon will snuff its light for the start of a new lunar phase on Saturday (Aug. 12), significantly darkening the sky. This will allow fainter meteoroids (flying space rocks that are still airborne) to make visible marks overhead.

The bad news, if you can call it that, is that some years the Perseids are more spectacular than others — and 2018 happens to be an off year.

In certain years (such as 2016), the Perseid shooting star count can rise up to about 200 meteors every hour. For these extra sparkly Perseid years, you can thank one of our obtrusive cosmic neighbors: Jupiter. While the giant planet never passes directly through Comet Swift-Tuttle's dusty remains like the Earth does, Jupiter is so massive that even coming within a few hundred million miles of the dust cloud is close enough to alter the cloud's path.

Such an alteration occurs every 11 years or so, when Jupiter makes its closest approach to the Swift-Tuttle debris cloud, at a distance of about 160 million miles (257 million kilometers). That may sound far, but at this separation, Jupiter's extreme gravity can actually pull the debris cloud across the cosmos, dragging it a full 930,000 miles (1.5 million km) closer to Earth, Space.com previously reported.

On those special years when Earth, Jupiter and the Swift-Tuttle cloud are all relatively near one another, Earth is treated to anextra-special Perseid shower. The passing meteoroids are brighter and closer, and there are a lot more of them streaking into the atmosphere. (Recent years when this happened include 1921, 1945, 1968, 1980 and 2004.)

This year, sadly, is not one of those years. But the sky show still warrants excitement. Bill Cooke, a scientist at NASA's Meteoroid Environments Office in Alabama, framed the phenomenon well in a 2016 interview with NASA.

"The meteors you'll see this year are from comet flybys that occurred hundreds if not thousands of years ago," Cooke said. "And they've traveled billions of miles before their kamikaze run into Earth's atmosphere."