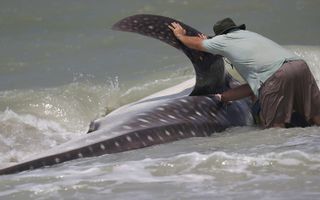 Beachgoers on Sanibel Island in Florida experienced a rare sight last weekend as they watched crashing waves pummel the ocean's largest fish. The carcass of the 21-foot-long (6.5 meters) whale shark was discovered tumbling in the surf around 7:30 a.m. on Sunday (June 22), the Fort Myers News-Press reported. Experts are unsure what killed the enormous animal, but they suspect it could have been red tide, a type of harmful algal bloom.

No matter the cause of death, a whale shark washing ashore is highly unordinary. "It's unusual even on a worldwide scale," said Bob Hueter, a shark biologist and director of the Center for Shark Research at Mote Marine Laboratory in Florida. "In southwest Florida, I'm not aware of any case at least in the 30 years I've been here."

The beached whale shark was a male that had died only days earlier, the Fort Myers News-Press reported. Based on its size, Hueter estimates the animal was no more than 20 years old. [In Images: Tale of an Injured Whale Shark]

Whale sharks (Rhincodon typus) are the largest fish in the sea and can weigh up to 60 tons (54 metric tons), according to National Geographic. These giants aren't predatory and instead are filter feeders. They open their wide mouths and suck in large amounts of water, and then push the water out through their gills, leaving plankton, shrimp, tiny fish and crustaceans behind.

Whale sharks are found in large numbers off the Yucatan Peninsula this time of year, and occasionally one or two will make their way a little farther north, close to Florida. But this year, Hueter said that he's been hearing of several more whale shark sightings off the southwest Florida coast than he has in the past. "It seems like the animals are hanging around longer this summer," he said. "At the same time, we've had a very persistent red tide along this coast."

Red tide is the common name for a harmful algal bloom, which occurs when there's a higher-than-normal concentration of microscopic marine algae in the water. The blooms happen about every year off the Florida coast and are most often caused by Karenia brevis; this marine algae, which can turn water a reddish color, produces toxins that are harmful to fish and other marine animals, according to the Florida Fish and Wildlife Conservation Commission.

"It's not impossible that this animal encountered a bloom of the red tide that, no doubt, would cause problems," Hueter said. He explained that red tides are known to start offshore in the sediment, and then rise up through the water column, where whale sharks and other marine animals are feeding.

Biologists with the Bailey-Matthews National Shell Museum in Sanibel took tissue samples of the shark to help determine if red tide is, in fact, what caused the animal's death. For now, authorities have decided to leave the shark on the beach and let nature take its course, the Fort Myers News-Press reported.