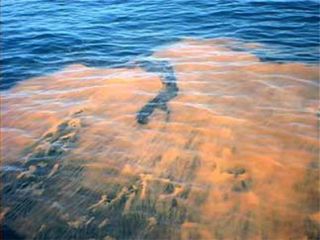 A photograph of red tide taken during a past outbreak.
(Image: © NOAA/Wikimedia Commons)

If you live near the Gulf of Mexico and you observed an unusual tinge of color in the ocean earlier this month, it wasn't your imagination. The strange hue was caused by a phenomenon called a "red tide," and beaches in states from Florida to Texas were closed to protect people from potential health risks.

A red tide is better known in the scientific community as a harmful algal bloom (HAB), and it occurs when there is a large concentration of single-cell plants called algae. Unlike most plants, algae can swim, said Matt Garrett, a research associate at the Florida Fish and Wildlife Conservation Commission's Fish and Wildlife Research Institute in St. Petersburg.

Different algae species have different structures to help them move. For example, the algae that make up the Florida red tide, a species called Karenia brevis, has a little whiplike structure that helps them move around in the water, Garrett said. [Marine Marvels: Spectacular Photos of Sea Creatures]

What is an algal bloom?

Algae is always present in the ocean in low concentrations (less than 1,000 cells per liter). An algal bloom forms when high numbers of algae rapidly appear on the scene, similar to a population explosion. Like all plants, algae needs light, water and nutrients, such as nitrogen, to grow. The amount of light and water that algae need to survive is fairly constant for in the ocean, which means algae populations are controlled by the level of nutrients available, Garrett said.

"There are a variety of things that control nutrient level, not just one," Garrett said. Some things that influence the amount of nutrients in water are properties of the physical environment, such as surface currents and wind conditions that bring cold, nutrient-rich water to the surface where algae grows, he said. Another thing that can influence nutrient levels is an area's proximity to an estuary, Garrett told Live Science.

Algal blooms typically form in late summer and fall, according to the Florida Fish and Wildlife Conservation Commission. While it may seem unusual to see a red tide in the winter, it's actually pretty typical, Garrett said. Red tides regularly occur well into the winter, he said.

The name red tide comes from the red tinge that some species of algal blooms turn the water when they experience a population explosion. The Florida red tide usually appears more yellow or brown, but people still call it a red tide, Garrett said.

Not all algal blooms are dangerous, but when there is a red tide outbreak, organizations such as the National Oceanic and Atmospheric Administration (NOAA) and regional U.S. Fish and Wildlife (USFW) offices monitor the situation because there can be negative effects. When Karenia brevis creates HABs it produces brevetoxins, a harmful chemical byproduct.

There is also a risk of respiratory problems if people spend time near algal blooms that are caught in breaking waves, because the algae cells are broken up by the wave, causing the toxins to go airborne, according to the Florida Fish and Wildlife Conservation Commission.