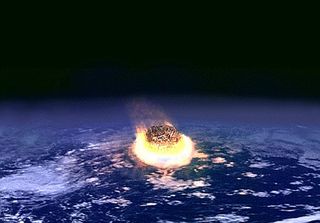 The asteroid that killed the nonavian dinosaurs may have also killed countless marine animals after it triggered a worldwide algal bloom, a new study finds.

The infamous 6-mile-long (10 kilometers) asteroid hit Earth about 66 million years ago, creating the Chicxulub crater, an expanse spanning 110 miles (180 km) across and 12 miles (20 km) deep, according to a blog post by the American Geophysical Union (AGU).

Upon impact, the asteroid threw a vast amount of tiny fragments into the atmosphere, where they became extremely hot from the friction of rubbing against one another. As they fell back to Earth, these fragments created a global layer of silica glass about 0.12 inches (3 millimeters) thick. That layer is now known as the Cretaceous-Paleogene boundary, according to previous studies. [Wipe Out: History's Most Mysterious Extinctions]

The radiant heat from the superhot fragments likely killed many plants and animals (as did other deadly factors generated by the asteroid, including shock waves, fires, tsunamis and darkness, as the fragments blocked much of the sun's light). About 75 percent of animal species went extinct, including the nonavian dinosaurs.

But it's long puzzled scientists why many marine animals, including plesiosaurs (giant marine reptiles) and ammonites (spiral-shelled mollusks), also died, even though the water should have shielded them from the thermal radiation, the AGU said.

The researchers tackled this question in the new study. They simulated how the fragments of molten and vaporized rock would have behaved after they were blasted up and out of the atmosphere and then fell back to Earth, the AGU reported. When they re-entered the atmosphere, the miniscule fireballs created massive amounts of nitrogen oxide gases, the researchers said.

Perhaps these gases caused acid rain, which would have increased nitrate levels in the oceans, the researchers said. This would have led to a worldwide algal bloom — one that created harmful toxins and upset marine ecosystems, possibly leading to mass marine extinctions.

"I think the take-home message is that the Chicxulub impact was pretty unfriendly to anything alive at the time," study lead author Devon Parkos, an aerospace engineer at the School of Aeronautics and Astronautics at Purdue University in Indiana, told the AGU. "What we worked on was hammering out exactly the details of just how bad a particular part of it was, trying to link the impact to the ocean extinction event."

Parkos and his colleagues used rocket science (literally) to figure out how the fiery-hot particles could have affected marine life. They used models made for spaceship re-entry to study how high-altitude and low-pressure conditions would have influenced the fragments, the AGU said.

"We knew from space shuttle measurements that nitrogen oxide production is actually much greater in these nonequilibrium [or changing] cases," Parkos told the AGU.

Earlier studies of the asteroid impact didn't take these reactions into account. Nor did they factor in the high amounts of nitrogen oxides that researchers have found in the geological layer chronicling the event, the blog post said.

The new model shows that high levels of nitrogen — matching what has been found in the geological record — were created by these unusual conditions. [Earth from Above: 101 Stunning Images from Orbit]

Over time, the algal bloom would have depleted nitrates and phosphates in the water, leading to an imbalance in marine nutrient cycles and the animals dependent on them.

The bloom would also have reduced the amount of dissolved oxygen in the ocean, thus making it hard for fish, invertebrates, bacteria and aquatic plants to live there. What's more, the enormous bloom would have blocked sunlight needed by phytoplankton for photosynthesis. Once the phytoplankton died, the ocean's food webs would have collapsed, he said.

The study was published online Nov. 4 in the Journal of Geophysical Research: Planets.