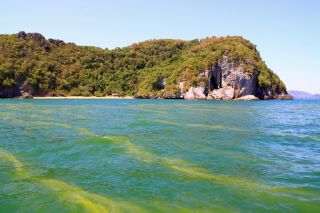 A red tide is caused by an increase in the population of toxic algae.
(Image: © vichie81 / Shutterstock.com)

Red tides aren't just the scourge of beachgoers; they're also deadly to marine life like fish, birds and even manatees. And they can have a serious impact on human health, too.

When millions of these microscopic algae reproduce and cluster in one area of the ocean, they can change the color of the water, according to the Centers for Disease Control and Prevention. A rusty shade of red is often seen, though the color may range from pink or orange to brown or yellow.

There are three types of algae associated with red tides. In the Gulf of Mexico, Karenia brevia is especially prevalent along the west coast of Florida and the Texas shore.

Farther north, Alexandrium fundyense is found on the Atlantic coastline from New England into Canada, while Alexandrium catenella is common throughout the Pacific, from Mexico to Alaska, and along the coasts of Australia and Japan.

A number of factors can cause an algal bloom to grow. Low salinity, a high nutrient content in the water and warmer-than-usual surface water temperatures are usually cited as contributing to a red tide's formation.

The algae linked to red tides contain a toxin that affects the nervous and digestive systems of animals. Red tides are usually accompanied by a massive die-off of fish, as well as the birds and other animals that feed on fish.

Even larger animals that feed on fish, shellfish and other marine life can be killed if they consume enough of the toxin. A red tide in Florida this month has been blamed for a significant die-off of manatees, while another red tide in 2012 may have caused a large number of squid deaths in California.

Humans are also vulnerable to the toxic effects of a red tide. Wave action can release the algae's toxins into the air, causing respiratory problems among people near the shoreline, particularly those with asthma, emphysema or other respiratory illnesses.

Red tides occur worldwide, and some reports indicate their occurrence is on the rise, according to the National Oceanic and Atmospheric Administration (NOAA). The phenomenon now takes place almost every summer along Florida's Gulf Coast, for example, and global warming may be contributing to the increase.

Researchers at NOAA used computer models to determine how warming ocean temperatures might change the timing and frequency of the algal blooms associated with red tides.

"We found that, not only will the risk for toxic blooms increase within the present-day bloom season, which is typically between July and October, but the bloom season itself will also expand," Stephanie Moore of NOAA's West Coast Center for Oceans and Human Health, told National Geographic.