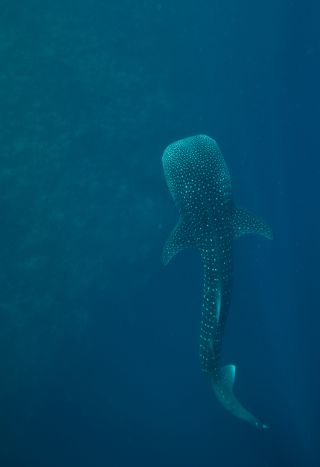 The world's largest fish, a whale shark, recently got up close and personal with fishers in Ocean City, Maryland, nudging their boat for long enough that the crew captured a stunning video.

Steve Moore — who helms the boat, dubbed "The Stalker" — was on an overnight fishing trip in late June when the crew spotted the 30- to 35-foot-long (9 to 11 meters) whale shark, the Delmarva Daily Times reported. A second sighting, on July 4, occurred near the same spot. At that point, fisherman Josh Schleupner jumped into the water to snorkel with the majestic fish, capturing awe-inspiring video in the process, the Delmarva Daily Times reported. [On the Brink: A Gallery of Wild Sharks]

But although the video of a monster fish nudging its snout into a boat or swimming just feet from a human may seem scary, such occurrences are usually not dangerous, nor are they particularly rare, said Alistair Dove, vice president of research and conservation at the Georgia Aquarium.

"The interest the animal takes in the boat is not unusual," Dove told Live Science.

Whale sharks (Rhincodon typus) are inquisitive animals that often take an interest in fishing vessels. Some fishers even keep a pole handy to nudge the behemoths back under the water, and responsible boaters will cut their engines to avoid slicing them up when this occurs, Dove said.

And despite their frightening appearance, the creatures are mostly harmless, Dove said.

"It's a wonderful shark in the sense that it breaks what we think we know about what sharks are," Dove said. "Here's the biggest shark of all, and it's a big, polka-dotted gentle giant that doesn't have big, nasty teeth [and] that is a filter feeder."

Whale sharks are massive sharks (not whales) that can grow to be up to 40 feet (12 m) long. They are filter feeders, meaning they use their 5-foot-wide (1.5 m) mouths filled with hundreds of bristly teeth to filter huge gulps of plankton from seawater. The elusive creatures are also deep divers, sometimes plunging to depths of 6,000 feet (1,800 m).

Most whale sharks live in the Indian and Pacific oceans, though about a quarter of the population roams the Atlantic Ocean. They thrive in warm waters that are more than 71 degrees Fahrenheit (22 degrees Celsius) and, during the summer, may coast up the warm Gulf Stream waters as far north as Long Island, New York. They may even ride warm eddies from the Gulf Stream pretty close to the shore, Dove said.

As the big fish in the sea, whale sharks have very few enemies (although, occasionally, a pod of orcas may attack a juvenile). However, the gentle giants are listed as endangered by the International Union for Conservation of Nature, mainly because humans have overfished them in the western Indian Ocean.

Whale sharks act as homes for many marine creatures. For example, remoras (also called suckerfish) literally stick to the sharks' skin; other fish school with the sharks, coasting on their swimming drafts; and parasitic creatures feed on the animals, Dove said.

Whale sharks are not aggressive, and as long as people keep a safe distance of at least 10 feet (3 m), they are not at risk of injury or harm. (The biggest risk of getting too close is being accidentally slapped by a whale shark's massive tail.) In places such as Indonesia and the Galápagos Islands, people often swim with whale sharks, Dove said.