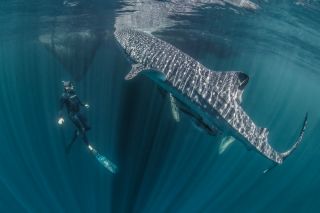 Known as the "gentle giants" of the shark family, whale sharks are the largest fish alive today. But there is much that scientists have yet to discover about their biology and habits.

And these massive fish recently revealed a big secret — they're capable of far deeper dives than previously suspected.

Whale sharks (Rhincodon typus) live in warm and temperate waters around the world, and can grow to about 50 feet (15 m) in length. They are filter feeders, hoovering up not only plankton and fish eggs, but also small fish and squid. Sometimes their diet gets them into trouble with fishermen; when whale sharks swim too close to boats that are trawling for baitfish, they can get caught in the nets.

However, their tendency to tangle themselves up turned out to be a lucky break for a team of researchers in Indonesia.

Whale sharks had previously been difficult to tag with fin-mounted satellite tags — trackers used on a number of shark species that can transmit position, water depth and temperature — because the sharks are too big for divers to manipulate alongside a research boat in order to attach the devices.

But a team of scientists recently took a different approach — tagging sharks that had gotten trapped in fishing nets before they were released.

Down in the depths

Over 18 months, scientists tagged 16 whale sharks in southeast Indonesia's Cenderawasih Bay, collecting a wealth of data on the sharks' movements — including how deep they dove — results that greatly surprised the researchers.

Of the 16 tagged sharks, 10 were observed to dive more than 2,000 feet (625 m), according to Mark Erdmann, a coral reef ecologist and vice president of the Conservation International (CI) Asia-Pacific marine program, who led the tagging expeditions.

And two of the smaller sharks dove even deeper than that by about 4,000 feet (1,219 m), Erdmann wrote in a blog post on the CI website, though the researchers have yet to learn what exactly the sharks are doing in those depths.

"Are they diving for food, or for other reasons? It's still unclear," he said.

The tags have a two-year battery life, and the scientists are greatly anticipating what unexpected whale shark behaviors might still be revealed. Meanwhile, the tagged sharks' movements can be followed on the CI website, using a "whale shark tracker" tool, part of an initiative to raise awareness and appreciation of these massive and mysterious marine creatures.