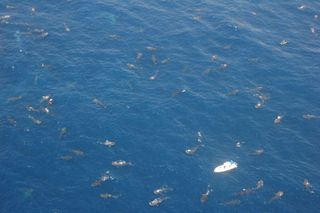 Aerial photo of whale sharks taken in the summer of 2009.
(Image: © Proyecto Domino)

If this year is like the last few, one of the most mysterious creatures in the world will soon descend upon the waters off of the Yucatan Peninsula. The blue, plankton-rich waters will become an all-you-can-eat haven for hundreds of giant whale sharks, an annual event known as "afuera."

As writer Jim Tharpe wrote Monday in the Washington Post, the sharks feed on fish eggs at the ocean surface in a "swirling mass." Nowhere else do whale sharks gather in such numbers in full view of human eyes – and researchers are using the opportunity to learn more about these elusive giants.

"Amazingly, the largest fish in the world, which is the whale shark, is one of the least known," Rafael de la Parra, a biologist and coordinator for Mexico's whale shark conservation Domino Project, told LiveScience. [Images of whale sharks]

The sharks live their lives largely out of the sight. Little is known about where they go and what they do when they aren't in shallow-water feeding groups like the ones in Mexican waters. Satellite tags, which beam back information about animals' whereabouts, have given some hints, said Robert Hueter, the director of the shark research center at the Mote Marine Laboratory in Florida.

Hueter, de la Parra and their colleagues have tracked 42 whale sharks from the Yucatan area with satellite tags since 2003. They've found that the animals swim massive distances. One female turned up in the Southern Hemisphere halfway between Brazil and Africa. She'd traveled a minimum of 4,500 miles (7,242 kilometers) in 150 days, not including vertical distance diving or any curves on her route.

"We're working on the hypothesis that they are going down there to give birth to their pups, at least that's one place that they're going," Hueter told LiveScience. The theory is consistent with observations of small whale sharks in the area, he said, but so far the team hasn't seen another female take the same journey.

The whale sharks also take deep dives. The deepest observed dive, Hueter said, was 6,325 feet (1,928 meters) below the ocean surface – more than a mile and a quarter. The sharks make these dives in a long, slow glide, Hueter said, leading researchers to speculate that it's a way for the animals to cover long distances without expending much energy.

The reason for the deep-sea excursions isn't the only whale shark mystery. No one knows anything about how the animals breed, said Jennifer Schmidt, a biologist at the University of Illinois at Chicago who has studied the genetics of the animals. One of her studies suggests that female whale sharks may save up sperm from a single mating to fertilize multiple pregnancies, but whale shark courtship has never been observed.

"The genetics tell us that there seems to be a large degree of migration and interbreeding between animals around the world," Schmidt told LiveScience. "There must be a place where adult males and females meet to breed, but we don't know where that place is."

Most feeding aggregations seen around the world are made up of adolescent males, Hueter said. The sharks that feed in Mexico are a slightly more inclusive slice of whale shark life, with more adults and females present. Still, the sex ratio is 2.6 males to every female, and no one knows why.

Nonetheless, studies of the Yucatan feeding frenzies have answered some questions about whale sharks. For one: What do they eat? The sharks are drawn to the site by an upwelling of cold, nutrient-rich water that leads to plankton blooms. Plankton is the main source of sustenance for these filter-feeding sharks. In particular, the afuera area – so named because it is "outside" the Mexican government's official protected zone for the sharks – is a spawning spot for a type of tuna called the little tunny. The fish probably spawn at night, Schmidt said, and their eggs rise to the surface in the morning.

Next, she said, "the sharks come in and literally swim at surface level with their mouths wide open just vacuuming in the eggs."

Because the sharks feed at the surface, researchers have been able to figure out how they eat, as well as how much. It turns out that whale sharks have a unique filtration system: Their mouths are equipped with pads that "look like scouring pads from your kitchen," said Philip Motta, a biologist at the University of South Florida who has studied the afuera whale sharks' feeding behavior.

As the sharks swim along, water probably hits these pads at an angle, Motta told LiveScience. The water continues through, but the plankton get deflected toward the back of the throat. The set-up probably prevents the filtering pads from getting clogged, Motta said.

"There's no other fish that has anything like this," he said.

For all their size (they can grow to more than 40 feet, or 12 meters, in length) whale sharks don't eat as many calories as might be expected. According to research by Motta and colleagues published last year in the journal Zoology, a 20-foot (6.2 meter) whale shark is estimated to consume 6,721 calories (28,121 kilojoules) per day. In comparison, a moderately active human man should consume around 2,500 calories per day.

It's impossible to know in advance whether the sharks will stay "afuera" or aggregate inside the protected zone this year, de la Parra said, but the research team plans to continue research on the sharks' genetics, growth and movements. They're also monitoring whether ecotourism affects the sharks' behavior. Numerous boats carry tourists out to feeding aggregations to get close to the sharks, Hueter said, which is good for conservation awareness. However, he said, many sharks already show signs of run-ins with propellers and boats, so ecotourism can be a threat.

Hueter and his Mote Marine Lab team aren't sure if they'll have funding to continue studies in Mexico this summer. They're watching a few remaining satellite tags from previous seasons, Hueter said. They are also monitoring shark populations in the northern Gulf of Mexico, looking for contamination from the 2010 Deepwater Horizon oil spill. It's likely to be tough, Hueter said, but the team hopes to draw blood from swimming whale sharks to check their health. As filter feeders, he said, whale sharks are particularly vulnerable to ocean pollution.

"They can't just keep their mouths closed and swim away and feed somewhere else," Hueter said. "Even if oil is present in microdroplets that have been dispersed, they are processing a lot of volume of water, and even the smallest trace of pollutants can become concentrated on their gills."