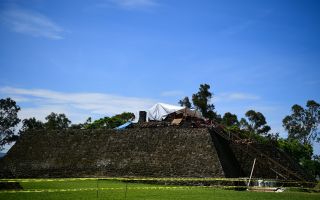 In 2017, an earthquake in Mexico damaged a historic pyramid — but it also revealed a temple that had been concealed inside.
(Image: © Ronaldo Schemidt/AFP/Getty)

Earthquakes are known for their destructive power, but a recent quake in Mexico had a surprisingly positive outcome for archaeologists — it revealed a hidden temple that had gone undetected for hundreds of years, concealed inside a pyramid.

When archaeologists at the site used radar to evaluate the extent of the damage to the pyramid, which dates to the 13th century, they found an even older temple tucked inside; the once-hidden ruin is thought to be more than 800 years old, according to the BBC. [In Photos: Amazing Ruins of the Ancient World]

Researchers with Mexico's National Institute of Anthropology and History (INAH) told the BBC that the temple was likely built in 1150 by Aztec people of the Tlahuica culture; the structure measured about 20 feet (6 meters) long by 13 feet (4 meters) wide, and pottery shards and an incense burner were preserved inside.

During the quake, tremors caused a partial collapse in the pyramid's central structure, affecting two known temples in the pyramid: one that was dedicated to the Aztec rain god Tlaloc, and another honoring Huitzilopochtli, the god of war, the Australian Broadcasting Corp. reported.

The earthquake buckled the floor between the Tlaloc and Huitzilopochtli temples, which sank, threatening their stability. As researchers scanned the damaged area, they discovered the hidden temple, about 6.5 feet (2 meters) beneath the floor, INAH representatives said in a statement.

Architecturally, the newfound temple was very similar to the other temples in the pyramid, with stucco walls, a bench, a facade built from elongated stones and the remains of a pillar that likely once supported the temple's roof, according to the statement.

Structural details in the temple were of particular interest to the scientists, suggesting that architectural styles of the Tlahuica may have influenced structures built centuries later by the Mexica people, according to Barbara Konieczna, an archaeologist with INAH's Morelos Center.

The secret temple is to date the oldest structure in the pyramid, and it underscores the importance of the Teopanzolco site for reconstructing the history of ancient cultures in Mexico, according to the INAH statement.