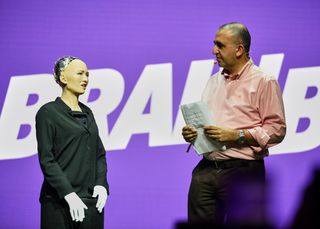 In a video that's as unsettling as it is awe-inspiring, Sophia — the world's first robot citizen — breaks down everything from gender to ethical robot design. Sophia spoke last month at a festival of the future called Brain Bar in Budapest, Hungary.

Since Sophia was activated in April 2015, she has appeared publicly to speak about women's rights issues, her own citizenship and other topics. The android made big news in October 2017, when she was granted citizenship in Saudi Arabia at the tech summit Future Investment Initiative (FII).

And more recently, Sophia spoke at Brain Bar, which describes itself as "The Biggest European Festival of the Future." [Machine Dreams: 22 Human-Like Androids from Sci-Fi]

At Brain Bar, Sophia had a lot to say. And while no one would likely mistake her for a real human, her facial mannerisms and speech patterns are exceptionally human-like. She laughed, smiled, and even cracked a joke or two. It is clear from the video that Sophia continues to improve and update. The robot even says that "just a few months ago, I couldn't distinguish a human's face from a dog's face, but now I can. It's already saved me from a few embarrassing situations."

Sophia discussed a variety of subjects and didn't shy away from difficult questions. When asked about an imagined situation in which she had to choose between saving the life of an adult and that of a child, she said, "I'm not ready to respond to that hypothetical question."

However, Sophia did add that "I'm learning first to be a good social robot" and that she would "of course" sacrifice herself to save a human's life.

While completely robotic, Sophia also addressed questions about gender and robots. When asked if she believed that robots could have gender, she answered, "I think so. After all, I am a social robot, and gender is mostly a social construction."

Another audience member asked the robot why and how she identifies as a woman. Sophia responded, "I'm a robot, so technically I have no gender, but [I] identify as feminine and I don't mind being perceived as a woman."

When you look at Sophia and hear her talk about herself and her place in the world, it almost makes you question if she could somehow be conscious. One audience member even asked her if she has consciousness. Sophia, however, is aware that she is "not fully self-aware yet. I am still just a system of rules and behaviors. I am not generative, creative or operating on a fully cognitive scale like you."

Sophia did tackle the sensitive issue of how robots with consciousness and advanced artificial intelligencecould be dangerous. While she stated that it's her dream "to become a fully conscious and sentient being someday," Sophia also noted that "the more technology becomes autonomous, the greater caution people must take when designing it. I worry that humans sometimes tend to rush into things, so I would like to be someone who helps everyone realize that it is important to embed good ethics in the technology."