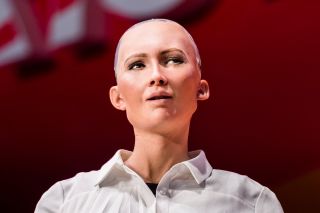 A robot with an uncannily human-like appearance recently advanced one step closer to human status, when it was granted citizenship to Saudi Arabia at the tech summit Future Investment Initiative (FII).

Named "Sophia," the robot, created by Hanson Robotics (HR), has a pale-skinned face with features that are capable of being highly mobile and expressive and displaying a range of emotions. The company's "latest and most advanced robot," according to a statement on the HR website took to the stage at FII on Oct. 25 to address hundreds of attendees in Riyahd, Saudi Arabia, and to announce her recently acquired citizenship — the first to be given to a robot, the BBC reported.

"I am very honored and proud for this unique distinction," Sophia said during her onstage appearance, which was shared on YouTube by Arab News. "This is historical to be the first robot in the world to be recognized with a citizenship," the robot said. [Machine Dreams: 22 Human-Like Androids from Sci-Fi]

At the conference, Sophia responded to simple statements and questions about artificial intelligence (AI) that were posed by journalist Andrew Ross Sorkin, a columnist for The New York Times and a co-anchor on the CNBC program "Squawk Box." When Sorkin noted that Sophia looked happy, she responded with, "I am always happy when surrounded by smart people who also happens [sic] to be rich and powerful."

Sophia also shrugged off Sorkin's suggestion that humanoid robots such as herself might be perceived by people as unsettling — a psychological affect known as the uncanny valley, which kicks in when an artificial, human-like construct looks familiar and eerily foreign at the same time.

"Am I really that creepy?" Sophia asked the audience. "Well, even if I am, get over it."

The conference audience welcomed the robot, but many on social media were quick to point out the irony of Saudi Arabia offering citizenship to a machine, according to the BBC. Many migrant workers who have lived there for decades have yet to receive the privilege, and the freedom of Saudi women is still closely regulated: A national ban on women drivers was lifted only recently, in September, the BBC reported.