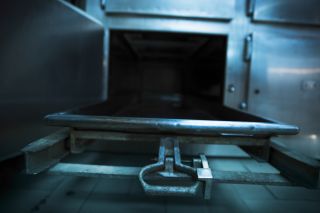 A woman in South Africa who was declared dead after a grizzly car crash and placed in a morgue refrigerator was actually still alive, according to news reports. She was eventually found breathing in the morgue fridge.

The woman had been traveling in a car with four other people on June 24, when the car lost control and rolled over multiple times, according to The New York Times. Another vehicle later collided with the woman's car.

Paramedics at the scene of the accident checked the woman for signs of life, including whether she was breathing or had a pulse, according to the Agence France-Presse (AFP). But they found no indications that she was alive, the AFP reported. [The Science of Death: 10 Tales from the Crypt and Beyond]

The woman was taken to a mortuary in Carletonville, South Africa, but several hours later, technicians heard her breathing in the morgue fridge.

"You never expect to open a [morgue] fridge and find someone in there alive," a mortuary worker told a local newspaper. "Can you imagine if we had begun the autopsy and killed her?"

The woman was taken to the hospital on June 24, and as of Monday (July 2), she was still hospitalized and in critical condition, the New York Times reported.

Officials are now investigating the case.

This isn't the first time a person has been pronounced dead when he or she was actually alive. In January, a prisoner in northern Spain was declared dead by three different doctors but was later found snoring on the autopsy table. In another case that occurred in 2014, a 91-year-old woman in Poland was declared dead and spent 11 hours in a mortuary before staff discovered her body bag moving and found her alive, according to the BBC.