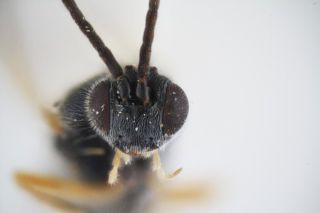 Imagine you are a caterpillar. You're sitting down for a nice picnic lunch with your caterpillar buddies in the shade of a eucalyptus tree, munching on the tasty leaves and joking about caterpillar things ("Why did the butterfly get kicked out of the dance? Because it was a mothball! LOLOLOL"), when suddenly, you feel it — a stabbing pain in your stomach. Your whole body starts to quake. You feel heavy inside, like something is trying to break free.

One bite at a time, dozens of black larval wasps gnaw their way through your body. Your buddies freak out until they are silenced by the same fate — each one split open by a brood of black alien babies. Needless to say, this is not the picnic you hoped for. [8 Awful Parasite Infections That Will Make Your Skin Crawl]

Unfortunately for caterpillars, similar incidents happen all over the world, all the time. This is the grim calling card of Microgastrinae, a subfamily of parasitoid wasps that reproduce by injecting their eggs into caterpillars and then allowing their young to literally eat their way through the host bug's body.

Researchers suspect there may be as many as 10,000 species of Microgastrinae wasps around the world, though only a few thousand have been identified so far. On June 25, Australian scientists writing in the Journal of Hymenoptera Research named three new species of the chest-bursting buggos — and one of them has an appropriately sci-fi horror twist.

"This species is named for the fictional creature from the movie franchise 'Alien,' which reportedly was inspired by the lifecycle of parasitic wasps," researchers from The University of Adelaide in Australia wrote in their new paper. "The name ofthe fictional creature comes from the Greek 'xeno' (strange) and 'morphe' (form) which is also appropriate."

D. xenomorphsports a shiny, all-black body of sculpted ovoid segments similar to the eponymous alien that H.R. Giger designed for the original movie in 1979. It's small — less than 5 millimeters long (0.2 inches) — but it's crowned with a pair of black antennae that more than double the wasp's body length. Female xenomorphs (the kind described in the new study) also come equipped with a remarkably long ovipositor, which is the needle-like bum protrusion that mother wasps use to inject their eggs into unfortunate host insects.

Game over, man! Game over!

As with the other two wasps described in the new paper (their names are Dolichogenidea finchi and Dolichogenidea mediocaudata), D. xenomorph is an Australian parasitoid — a parasite that must kill its host in order to continue its life cycle. In the xenomorph's case, that host is an unfortunate species of Australian moth caterpillar called Antipterna euanthes, which has a penchant for munching on eucalyptus leaves both on and off the tree.

The parasitoid life cycle starts when a mother xenomorph stabs her ovipositor into the poor caterpillar's body and plants dozens of tiny eggs there. There, the wasp larvae hatch and slowly eat their host from the inside.

When they've fed on enough blood and have no room left to grow, the larvae chew through their host's body within a few weeks. Once liberated, the brood immediately spins a communal cocoon to shield them in their next phase of development. As for the caterpillar? If it doesn't die right away, the wounded host may become a sort of brainwashed bodyguard for the new wasp brood, guarding the cocoon and swatting away other parasites that might want to infect the defenseless larvae with their own eggs.

Eventually, the host dies; the larvae emerge as mature wasps and continue the hunt for fresh caterpillars in which to nest their rude, rude eggs.

While D. xenomorph is not a widespread species (specimens were found only near the southeastern and southwestern coasts of Australia, the researchers wrote), it's likely just one of thousands of unique parasitoid wasp species living in Australia alone.

"We collected over 500 wasps from a particular subfamily, from all over Australia, and determined that there were more than 200 different species just in that relatively small number of specimens," study author Andrew Austin, a professor of biology at The University of Adelaide, said in a statement. "There are currently only 100 species described in this subfamily for Australia, so we've at least doubled the number of known species."

This is bad news for caterpillars but better news for farmers, vintners and other enemies of crop-eating bugs. According to the researchers, parasitoid wasps have been used in agriculture to help control caterpillar populations, and further cataloging the species' biodiversity could impact future conservation efforts and agricultural policy. Hopefully, it'll inspire a few new horror movies, too.