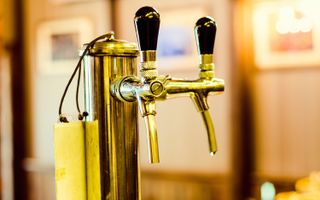 Forget the conundrum of whether your glass is half-empty or half-full — pretty soon, plenty of beer glasses in the United Kingdom may not have anything in them at all.

Soda drinkers won't have much to toast with, either. And it's all due to a severe disruption in the European supply chain of industrial, food-grade carbon dioxide (CO2), the gas that lends the beverages their fizz, gas industry website Gasworld reported on June 19.

The CO2 shortage isn't just affecting beverages — it's also serving up a generous helping of trouble for meat production in Europe. Carbon dioxide is used in meat packaging to slow the growth of microbes and preserve the meat's color and freshness, and in slaughterhouses, CO2 is used to stun animals prior to killing them, representatives of the British Meat Processors Association (BMPA) reported in a statement released June 21. [Raise Your Glass: 10 Intoxicating Beer Facts]

The trouble began with the recent closure of several industrial plants that provide liquid CO2 across northern Europe; they were shuttered "for various reasons, including maintenance and refurbishment," affecting a number of businesses that produce or distribute food and beverages, Gavin Partington, director general at the British Soft Drinks Association, said in a statement on June 20.

BMPA officials reported on June 21 that the CO2 shortage would likely last "approximately four weeks." In the days that followed, the flow of CO2 across northern Europe slowed to a trickle, with the U.K. the hardest hit by the CO2 scarcity. On June 26, a widely used British wholesale food and beverage company began rationing distribution of carbonated drinks, restricting businesses' purchases to no more than 10 cases of beer and a maximum of five cases of cider or soda, CNBC reported.

Meanwhile, concerns were growing that meats, beer and carbonated beverages would disappear from British supermarket shelves "if a normal supply of CO2 is not restored as quickly as possible," Ian Wright, a representative of the U.K.'s Food and Drink Federation (FDF) said in a statement released June 29.

CO2 that puts the fizz in your beer and soda is fundamentally the same as CO2 in Earth's atmosphere, but it must be food-grade quality. In other words, to be used in food or drink, CO2 has to be purified according to local regulations and standards, and then shown to be free of contaminants, chemist and American Chemical Society member Richard Sachleben told Live Science.

This CO2 is typically produced as a byproduct of industrial or chemical manufacturing processes, such as those used in ammonia plants. It is dissolved in liquid in sealed containers under high-pressure conditions, Sachleben explained. Once the CO2 is sealed up, it has nowhere to go until the container is opened, which is why you see fizz rising in a bottle after you open the cap and release the pressure inside, enabling the CO2 to convert to gas and escape, he said.

"As long as you maintain the pressure, carbon dioxide will stay in the liquid — if you release the pressure, it'll release into the atmosphere," Sachleben said.

But in case you're wondering if the U.K. and the rest of Europe could get some relief from the CO2 shortage by siphoning CO2 from the atmosphere — that wouldn't be a practical solution, Sachleben told Live Science.

Even with rising levels of atmospheric CO2 due to climate change, CO2 in the air is still only about 400 parts per million, and is mixed with nitrogen, oxygen and other elements. It would therefore be quite a costly and time-consuming challenge to extract and refine purified CO2 from air — at least in the amounts that are typically collected from industrial processes, he said.