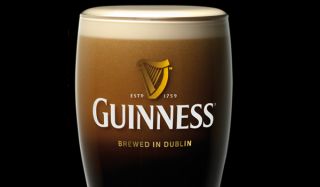 When you pour a frosty brew, there's a pretty thick layer of head on top, and it sticks around for a while something that doesn't happen with a soda or a cider. But why?

You do get some foam off soda, and also off champagne, said Karl Siebert, a professor of biochemistry at Cornell where he studies the microbiology of different drinks. But those bubbles don't create a head, Siebert explained, for a confluence of reasons.

The first thing you need is the combination of special proteins and dissolved gas in beer, the gas is usually carbon dioxide, although it occasionally can be nitrogen. Some of the beers with a really good foam, like Guinness, use nitrogen, says Siebert. Soda, as you're surely away, also has dissolved gas, but it lacks one special foam-forming ingredient --beer has proteins in it called albumins which form complex bonds with the bitter-hop compounds used to make beer , which make it easy for bubbles to stick around.

Another helpful bubble-maker is a spot for carbonation to form. Often, the inside of beer glasses will have a special etching pattern or scratch that gives the gas something to grab onto, which encourages bubbles to take shape something known as a nucleation site. Soda or champagne bubbles will also gather on those sites, but without the special proteins, they won't stick around.

Another factor in beer foam, Siebert said, is pH level. He's currently working on experiments to determine the ideal pH level for bubble formation, but he noted that there have been conflicting studies in the past. The level of alcohol also matters. Foam won't stick around if it's too high (say, a Belgian beer in the 9-12 percent alcohol range) or too low (like a Bud Light which clocks in at 3.2 percent). The goldilocks level for alcohol is around 5 percent, according to Siebert. The exact mechanisms of how this works is still an area of research for beverage scientists and drinkers alike.

So foam is based off these five factors gas, alcohol , pH, proteins, and bitter compounds. Sibert says if you're looking for a beer with a nice head of foam, try one of the many German beers that are made with an all-malt base. The higher hops content means more bitter compounds to bond with the proteins and a thicker layer of bubbles to fizz in your face.

Got a question? Send us an email and we'll crack it.