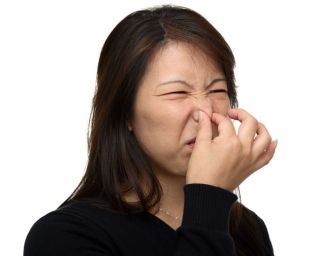 Extra gases collected in the gut cause burping.
(Image: © Dreamstime.)

The only thing grosser than a burp is what causes it: bacteria deep in your belly. And, of course, extra gas and fizzy drinks.

Billions of tiny bacteria hang out in your intestines to help digestion. They turn some of the undigested food into vitamin K and vitamin B. In the process, bacteria release smelly gases like methane, which make us burp … and fart !

Plus, just walking around with your mouth open, you’re swallowing gases such as oxygen and nitrogen. By the end of a long day, you’ve swallowed extra gas that needs to escape out one end or the other. Experts at the Indiana University School of Medicine estimate we release a quart of that extra gas a day.

The carbon dioxide in bubbly drinks like soda and beer can cause burps too.

Babies digestive systems aren’t well equipped to burp on their own, so they need to be patted on the back to help the gas bubbles rise out of their bodies. Bottle-fed babies gulp more air while they eat than breast-fed babies, and need more help burping. The American Academy of Pediatrics recommends making sure the air stays at the bottom of a bottle, as bottles fill with more air than milk.