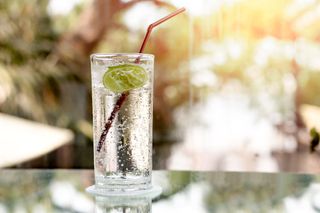 Have you ever picked up a can of sparkling water, looked at the nutrition facts and marveled at all the nothing? Zero calories, zero sugar, zero added ingredients ― how can so much nothing taste so refreshing, and why does it spark so much controversy?

When it comes to the nutritional perks and perils of sparkling water, health myths abound. Does carbonated water erode your teeth? How about your bones? And is it as hydrating for you as regular, run-of-the-mill tap water?

Although there's not a huge amount of research on this yet, several studies have shown that, yes, sparkling water hydrates you just as well as still water (and nutritionists tend to agree). This makes sense, considering that carbonated water is just regular water infused with bubbly carbon gas. [How Much Water Do You Really Need To Drink?]

These bubbles might make you feel fuller or give you some indigestion if consumed too quickly — and that could impact how much water you drink. One sports medicine study found that people were less likely to hydrate after exercising if all they had on hand was carbonated water; however, a different study found that kids who had access to a home carbonation machine (like a SodaStream) were better hydrated than kids who didn't. Whether you end up hydrating more or less when reaching for a glass of sparkling water might ultimately be a matter of whether you have the stomach for it.

So, what about the claim that carbonated water is more likely to erode your teeth and bone calcium?

The good news is, there's absolutely no evidence that drinking carbonated water has any effect on your calcium levels. This myth may have sprung from a 2006 study that found that older women who drank sugary sodas every day had slightly lower bone mineral density than women who didn't. Women who drank plain carbonated water did not show any such dips in density.

On the other hand, there is some truth to the claim that carbonated water can erode your tooth enamel. (Tooth enamel is the hard, outer surface of your teeth.) This is due to the carbonic acid — a byproduct of water and carbon gas — that gives sparkling water its bright, slightly tangy taste. Studies have found that carbonic acid can indeed have a mild erosive effect on your teeth over a long  time. Carbonated drinks flavored with citrus — like lime, lemon and grapefruit — contain small amounts of citric acid on top of that, and are slightly more erosive as a result.

Still, the acids in non-sugary sparkling drinks are weak, and so is the damage to your teeth. For comparison, soda was found to be about 100 times more damaging to teeth than simple sparkling water.

At the end of the day, plain sparkling water is about as benign an H2O substitute as you can find. The Centers for Disease Control and Prevention highly recommends drinking it instead of syrupy sodas. So, when you reach for that can of delicious nothing, make sure it truly is nothing but carbonated water. Added sugar, salt or extra ingredients come with all sorts of added problems.