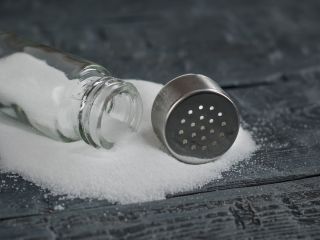 How much do you really need?
(Image: © Shutterstock)

The constantly-debated question: How much salt do you actually need to be healthy? On one hand, your body needs the nutrients in salt to survive — particularly sodium.

"Sodium is the most important extracellular electrolyte," Dr. Paul Whelton, a professor of global public health at Tulane University, told Live Science. "It plays a role in many, many health functions."

Electrolytes are tiny substances that dissolve in water to create positively- and negatively-charged ions that conduct electricity. A proper balance of these charges inside and outside of your cells is crucial to regulating many bodily functions, including hydration, blood pressure, and proper functioning of nerves and muscles.

And yet, as important as sodium is, most Americans consume way too much of it. According to the federal government's official dietary guidelines, the average American adult should ingest a maximum of 2,300 milligrams of sodium every day — a far cry from the estimated 3,400 mg the average person actually consumes. High-sodium diets like these have been widely linked to hypertension (high blood pressure), which can increase your risk of suffering a heart attack or stroke.

So, how much salt do you actually need to survive?

"The minimum in a country like the United States is probably about 1500 mg a day," Whelton said. According to the Food and Drug Administration (FDA), this is about the amount adults with high blood pressure should aim to consume each day. It's also the daily amount the Center for Disease Control and Prevention (CDC) recommends for babies under three years old.

Other organizations suggest that full-grown adults can get away with far less.  According to the American Heart Association (AHA), the minimum physiological requirement for sodium is less than 500 mg a day — or less than the amount in one quarter of one teaspoon of table salt.

For most Americans, eating this little sodium is near impossible. Of the roughly 3,400 mg of sodium the average American consumes every day, about 71 percent (or roughly 2400 mg) comes from added salt in processed and prepared foods, the CDC estimates. Eschewing a dash of table salt on your dinner will hardly make a dent in a sodium diet that's largely determined by food manufacturers, Whelton said.

Certain groups of people, however, face a heightened risk of dropping below their minimum sodium needs and developing a condition called hyponatremia, which occurs when sodium becomes too diluted in the body, causing cells to swell up with water. Inflamed cells can cause myriad health problems including headache, nausea and fatigue — and may even be life-threatening.

Older adults with decreased kidney function, or anyone who takes medication that affect sodium levels (such as diuretics that help flush excess water and sodium from the body), face a heightened risk of hyponatremia. So do athletes who drink excessive amounts of water but fail to replace the sodium they sweat out while exercising. (This is why many sports drinks contain added electrolytes.)

Most people, however, don't need to worry about getting enough salt. Whatever salt you get in your regular daily meals is probably more than enough to keep your cells well-oiled.

"I’m not too hung up on 1500 mg," Whelton said, "because most of us are so far away from consuming even that."