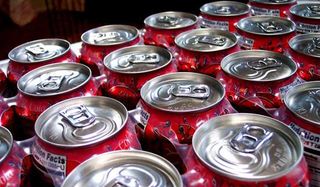 You may not think the fizz in your cherry soda is spicy, but your tongue does, a new study suggests.

The carbon dioxide in fizzy drinks sets off the same pain sensors in the nasal cavity as mustard and horseradish, though at a lower intensity, according to research from the University of Southern California.

"Carbonation evokes two distinct sensations," study researcher Emily Liman, an associate professor at the university, said in a statement. "It makes things sour and it also makes them burn."

A 2009 study in the journal Science found that carbonation trips cells in the tongue that detect sourness.

"We have all felt that noxious tingling sensation when soda goes down your throat too fast," Limon said.

Researchers wanted to find which cells are responsible for the painful sensation that comes with drinking soda. They poured carbonated saline onto a dish of nerve cells taken from the nose and mouth. They found the gas only activated the cells that express a gene called TRPA1 and serve as general pain receptors.

"The cells that responded to [carbon dioxide] were the same cells that detect mustard," Liman said.

The study was published online today (Sept. 28) in the Journal of Neuroscience.