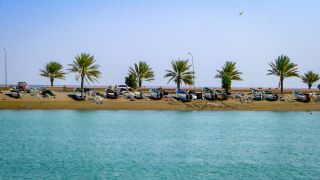 A row of palm trees and empty boats sit on the sand in Quriyat, Oman.
(Image: © Shutterstock)

The day of June 26 was a scorcher in the town of Quriyat, Oman. Temperatures in the town, which is weathering a miserable heat wave, peaked at 121.6 degrees Fahrenheit (49.8 degrees Celsius) during the day, according to Weather Underground. That's just shy of the Omani record-high temperature of 123.4 degrees F (50.8 degrees C), set on May 30, 2017.  But anyone in Quriyat hoping for an evening respite from the extreme heat would have been disappointed: Temperatures fell to a low of just 108.7 degrees F (42.6 degrees C). That's a world record: the highest "low" temperature ever recorded in history.

Oman, a hot and dry country located on the southeastern tip of the Arabian Peninsula (south of Saudi Arabia and east of Yemen) is a frequent site for ultrahot weather, including the last record-high low; Weather Underground reports that record, 107.4 degrees F (41.9 degrees C), was set at Khasab Airport on June 27, 2011.

The new record, Weather Underground reported, is the result of a "ridge" of high-pressure air in the upper atmosphere over the Arabian Peninsula, which trapped humid air from the Indian Ocean in the region, preventing heat from escaping at night.

The hottest temperature ever recorded on the Earth's surface was 134 degrees F (56.7 degrees C), in Furnace Creek Ranch in Death Valley, California, on July 10, 1913, according to the World Meteorological Association.