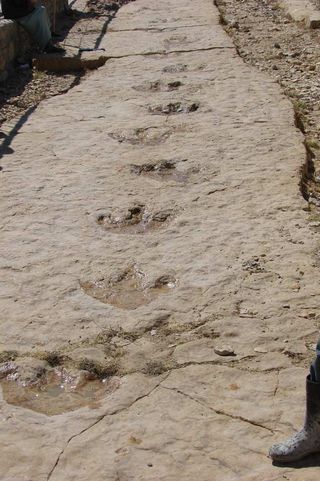 For the first time, dinosaur footprints have been found on the Arabian Peninsula.

In ancient coastal mudflats in Yemen, fossils reveal that a herd of 11 gigantic dinosaurs — sauropods, the largest animals that ever walked on land — tramped deep tracks into the earth that have lasted roughly 150 million years.

Nearby, there are tracks of a lone ornithopod — a large, common vegetarian with bird-like, three-toed feet that walked on its hind legs, sometimes referred to as the "cow of the Mesozoic," or Age of Dinosaurs, said researcher Anne Schulp of the Maastricht Museum of Natural History in the Netherlands.

Altogether, these new tracks help shed the most light to date on the mysterious history of dinosaurs in the Arabian Peninsula. Only a few dinosaur fossils have been reported so far from the Arabian Peninsula — isolated bones from the Sultanate of Oman and possible fragments of a sauropod from the Republic of Yemen.

"No dinosaur trackways had been found in this area previously. It's really a blank spot on the map," Schulp said.

And "big dinosaurs don't live alone," Schulp told LiveScience. "I'm sure there were some carnivorous dinosaurs around as well, as well as much smaller animals, not only dinosaurs."

Just as expert trackers can learn much about their quarry today from tracks, so too can scientists discover critical details about dinosaurs. For instance, the fact that sauropods did not leave furrows from their massive tails with their footprints means these giants did not drag their lengthy tails behind them. Instead, they must have held them high off the ground, to help balance their bodies, given their equally long necks.

"We really want to learn when did which dinosaurs live where, and why was that?" Schulp said. "How did the distribution change over time, why did one replace another and move from one place to another?"

The newly announced fossil tracks were discovered by a local journalist in 2003, about 30 miles north of the capital of Sana'a near the village of Madar. They probably went unnoticed for so long because they were too big to be spotted by the untrained eye and were partially covered by rubble and debris.

"It isn't a surprise that they were overlooked," Schulp said.

The site preserved footprints from 11 small and large sauropods. Judging by the lengths of their strides and details of their footprints, they were each ambling together at the same speed of roughly 1.8 mph. These serve as an excellent example of dinosaur herding behavior, the researchers said.

"It's rare to see such a big example of a dinosaur herd. This is interesting social behavior for reptiles," Schulp said. "I'm really excited by finding out that the whole herd is walking at the same speed, with the younger ones having to walk a bit quicker — making short steps at a higher frequency — and the big ones walking at the same speed with long steps at a lower frequency. It just works out wonderfully well."

The ornithopod left 15 footprints, each averaging 22 inches long and wide, or a size 44 U.S. men's shoe. Judging by its footprints, it was traveling at "a leisurely walking speed of 3 to 4 kph (1.8 to 2.5 mph)," Schulp explained.

Although ornithopods and sauropods overlapped in time, it is a bit unusual to find evidence of such a big ornithopod in the late Jurassic, the epoch from which these fossils date, the researchers noted. Back then, the African and Arabian Peninsular landmasses had not yet been separated by the Red Sea.

"These trackways help us to assemble a more detailed picture of what was happening on the southern landmasses. It's exciting to see new paleontological data coming out of Yemen, and I think there is a lot more to discover," said researcher Nancy Stevens, an Ohio University paleontologist. "This international collaboration provides an exciting new window into evolutionary history from a critically undersampled region."

This area could readily yield more trackways, the researchers added.

"I'm absolutely sure we've only scratched the surface yet," Schulp said. "There is much more to be discovered in the area, much more to be learned. I hope we can build on this fieldwork and go out searching for more tracks in the not-too-distant future."

These trackways do "represent a new frontier," said Martin Lockley, curator and director of the University of Colorado at Denver's fossil footprint collection, who did not participate in this study. "People haven't really looked for dinosaur tracks very much in the Middle East. My guess is these finds are just the tip of the iceberg — maybe not the best metaphor for the Arabian Peninsula, but still, I expect there's a lot to be found there."

The Yemen Geological Survey is now preserving this area and plans to improve its accessibility to tourists. "It's a wonderful piece of geological heritage, and something well worth visiting," Schulp said.

Schulp, Stevens and their colleague Mohammed Al-Wosabi will detail their findings online May 21 in the journal PLoS ONE.

Partial funding for the research was provided by the Yemen Geological Survey and Ohio University.