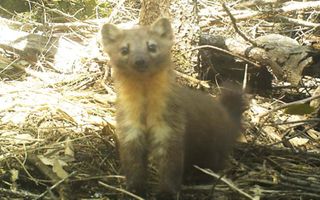 The Humboldt marten (Martes caurina humboldtensis) is an elusive forest creature that may soon be classified as endangered
(Image: © Charlotte Eriksson/Oregon State University)

A furry, cat-size carnivore called the Humboldt marten is struggling to survive in an area sprouted with marijuana farms, and now California wants to protect the adorable creature by declaring it an endangered species.

The state's declaration would apply only within state lines and wouldn't offer federal protections.

A member of the weasel family, the Humboldt marten (Martes caurina humboldtensis) lives deep inside the redwood forests of the Pacific Northwest, according to the Center for Biological Diversity. The elusive animal was once thought to be extinct, but it was rediscovered in 1996. The Center for Biological Diversity estimates that 95 percent of the marten's habitat has disappeared due to deforestation. [In Images: 100 Most Threatened Species]

Cannabis cultivation is likely the biggest reason for the Humboldt marten's decline, The Guardian reported. Not only are forests cleared to make room for farming, but many cannabis farmers also use rodenticides that make their way into the forest food chain, killing anything that eats rodents, including the martens. Live Science reported on a similar story in January about spotted owls (Strix occidentalis) in this same region of California that are dying after eating prey killed with toxic rodenticide left out by marijuana farmers.

The California Department of Fish and Wildlife (CDFW) reviewed a petition filed by the Center for Biological Diversity and the California-based Environmental Protection Information Center asking the state to list the animal as endangered. The marten is currently classified by California as a species of special concern, but a status review from the CDFW found that listing the species as endangered is warranted, The Mercury News reported. The final determination is expected to be made in August, The Mercury News reported.