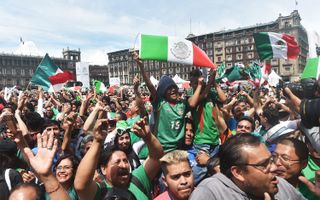 Fans of Mexico's soccer team streamed into the streets by the tens of thousands — but they did not cause an earthquake, one expert says.
(Image: © Rodrigo Arangua/AFP/Getty)

Reports that ebullient soccer fans triggered a man-made earthquake in Mexico City on Sunday (June 17) may be nothing but sound and fury, one seismic expert has said.

On Sunday morning, the Mexican men's national soccer team scored a game-winning goal against the defending World Cup champions, Germany. Minutes later, several seismographs around Mexico City reported activity that looked like a small, artificial earthquake, according to a tweet from the Institute of Geologic and Atmospheric Investigations in Mexico. [The 10 Biggest Earthquakes in History]

The institute added that the small tremors "originated artificially" and were possibly "because of mass jumping." Live Science posted an article sharing the institute's claims on Monday (June 18).

Although it is not unheard of for jubilant sports fans to cause earthquake-like tremors via mass cheering and stomping, this seemingly was not the case in Mexico, a new analysis suggests.

According to Suzan van der Lee, a professor of Earth and planetary sciences at Northwestern University in Illinois, available seismic records do not support the claims that any quakes were caused by mass celebration. Rather, Van der Lee told the news website Newswise, many of the seismograph images circulated on Twitter and in the media were recorded on tiny, handheld seismometers installed in private homes.

"The signal shown could be related to a family or two reacting to the goal, but the signals certainly do not stem from a mass celebration," Van der Lee said. "Convincing reports about fans in mass celebration creating seismic signals are made near stadiums where fans gather — not from people watching TV at home."

The seismometers that initially reported the soccer quake, called Raspberry Shake devices, are typically used by amateurs and installed in the basements of residential buildings, Van der Lee said.

Van der Lee also reviewed professional data gathered from seismometers at the National Autonomous University of Mexico in Mexico City, and saw no noticeable uptick in seismic activity during the game, Newswise reported.

Another seismograph that did show a spike in seismic activity during the game was taken from the city of Guerrero, about 140 miles (225 kilometers) away from Mexico City. Coincidentally, Guerrero experienced a magnitude-2.8 earthquake during the World Cup match (and another, larger earthquake the day before).

"I estimate that the Guerrero earthquake recorded by the station in the 39th minute of the game is a magnitude 2.8 earthquake at a similar distance as a magnitude 4.3 earthquake a day earlier," Van der Lee said. "A purely natural earthquake that coincided with the game by chance."