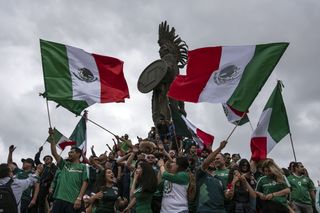 Mexico soccer fans celebrate big at the Cuauhtemoc monument in Tijuana, Baja California state, after a win against Germany in their first match of the 2018 World Cup.
(Image: © GUILLERMO ARIAS/AFP/Getty Images)

Editor's Note: Seismologists have now said the World Cup celebrations did not create an "earthquake." Read more about the update here.

Seismologists in Mexico City have confirmed that soccer fans are literally a force of nature.

According to a translated tweet from the Institute of Geologic and Atmospheric Investigations in Mexico, the small earthquake "originated artificially" and was possibly "because of mass jumping" that occurred in celebration of Mexico's game-winning goal. (The team went on to win 1-0 against Germany, the defending World Cup champions.)

To be clear, the crowd's vibrations did not cause any tectonic plates to shift. This type of the tremor — known as an "artificial" or "manmade earthquake" — likely would not have been perceptible to the people of Mexico City, but it nevertheless created a big enough rumble to register on multiple seismic instruments, the institute wrote. The cause was likely "widespread celebration," as evidenced by the more than 75,000 gleeful soccer fans who reportedly mobbed the capital's main square after the game.

You don't need a scientist to tell you that this story is both hilarious and awesome. But the footie-induced tremors are actually not that rare; it turns out that eager sports fans cause artificial earthquakes all the time.

One of the biggest incidents occurred in 2011, when Seattle Seahawks football fans responded to an epic 67-yard touchdown with such ferocious roars and stomps that the activity registered as a magnitude-2.0 earthquake on nearby seismic equipment. Legend remembers this incident as the "Beast Quake," and it even inspired scientists to compare the relative loudness of Seahawks fans to NASCAR fans — another notorious seismic force in the sports community. (The results: Both fandoms are very, very loud.)

Outside of the sports world, man-made earthquakes have been on the rise in the U.S. for several years, largely due to impacts caused by oil and gas production. Hydraulic fracking, for example, involves removing billions of gallons of wastewater from underground oil deposits. For lack of an easier storage solution, a lot of this water then gets pumped back into the ground, where it increases pressure on subterranean rocks and can trigger serious earthquakes.

In Oklahoma, where fracking is common, earthquake frequency has multiplied by 600 times the state's pre-fracking rate, Live Science previously reported. "We suspect the vast majority of these earthquakes are from produced wastewater," Austin Holland, head seismologist for the Oklahoma Geological Survey, told Live Science.

So, yes: The might of exuberant sports fans is clearly a force to be reckoned with. But humankind will continue shaking the world long after the World Cup closes.