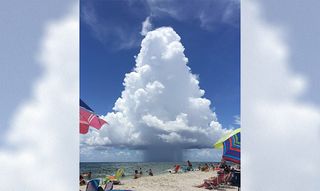 Capping a week when the last thing anyone wanted to hear about was news of a mushroom cloud, a viral photo of a glorious, impossibly symmetrical storm cloud has nevertheless entranced the internet with its perfect mushroominess.

Gulf Shores, Alabama, resident Rick Geiss snapped the impressive picture from his local beach in July 2016. This week, Geiss shared the image with Alabama meteorologist Jake Dunn, who promptly tweeted it out as "quite possibly the best example of a mushroom cloud I have ever seen!"

And exemplary it is. With a towering cone of fluffy, white vapor perched perfectly atop a thin stem of malevolent gray rain, the cloud had been likened to a giant Christmas tree in the sky or a real-life vision of Super Mario's favorite fungus.

"There is a large, central updraft that shapes the overall cloud," Halverson said. "The tapered appearance probably occurs because drier, cooler air is being pulled inward and upward along the margins of the updraft … evaporating some of the cloud edges and 'sculpting' its unique shape."

Why is that tapered mushroom sitting all alone over the ocean? According to Halverson, the viral cloud is a textbook example of a "pop-up" thundershower. Storms like these usually form and collapse within about 30 minutes, and they occur independently of larger weather systems like cold fronts, Halverson said. To form, a pop-up storm needs just a little moisture and the hot summer sun.

It starts when warm, humid air rises high into the sky. Eventually, the air column — or updraft — rises high enough that the moist air starts to cool into water droplets. These droplets gather within the cloud and, after about 15 or 20 minutes, pour back down as rain.

"As the downdraft plummets straight down through the updraft, it snuffs out its buoyancy," Halverson previously wrote. "Without a self-sustaining updraft, the storm's final minutes are literally spent raining itself out."

See? Not all mushroom clouds are terrifying. Pyrocumulus clouds, on the other hand, are a different story.