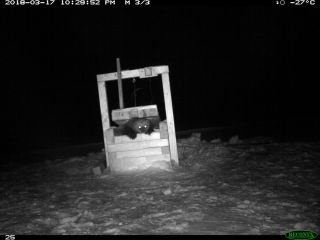 We don't often get visits from the same wolverine. Clearly, this animal has our number.
(Image: © WCS )

We were not expecting a familiar face as we cracked open the wooden box trap we'd carefully set on the remote north slope of Alaska. But there he was: a wolverine staring back at us, his face covered with the shredded remains of frozen caribou.

As conservationists in Beringia — an (at least historically) icy patch of land and sea that straddles the United States, Canada and Russia, hugging the Bering and Chukchi seas — we have spent a fair share of time considering this elusive carnivore, the wolverine (Gulo gulo).

The stout, canny predator, sometimes scavenger, can grow to be about 45 lbs. (20 kilograms) and is built to withstand the challenging, subzero-degree environment of the Arctic. With feet large enough to act like snowshoes, strong musculature and a honed set of teeth and claws, wolverines can take down an animal as large as a caribou in the middle of winter, but they'll also hunt small rodents, such as ground squirrels, when they're looking for a tasty morsel. Their thick, frost-shedding fur helps them survive at temperatures that, in the twilight of winter, can drop below minus 50 degrees Fahrenheit (minus 45 degrees Celsius). [Camera Trapped: Elusive Wildlife Caught in Photos]

Freezing temperatures are no match for the wolverine. These furry beasts will travel wide swaths of territory to find a mate or secure a meal. If they want to save a meal for later, wolverines have been known to cache it in the snow like a hidden trove of TV dinners.

This particular wolverine staring back at us, however, recently threw us a curve ball: He had traveled great distances in order to enjoy a free meal from our box trap and, as a result, found himself caught in the name of science until we found and released him back into the wild.

To be clear, wolverines are generally thought of as reclusive animals, whose meals often consist of a carcass left behind by another predator. For our research, we use the scent of meat to lure and then trap them in a wooden box. Despite being safe, the trapped wolverines usually appear resigned at best and seem to avoid our traps once they're released. But this wolverine was different, having clearly thrown convention to the wind.

Because he was first caught on St. Patrick's Day this year, we named him Seamus. His strategy was simple: get trapped, enjoy a meal and get released — room and board, if you like.

Seamus was first captured around 10:30 p.m. local time on a narrow swath of land between the Arctic Refuge and the National Petroleum Reserve in Alaska, under the swirling green of the aurora. There's something ineffable about holding an anesthetized wolverine in your arms under one of nature's most exquisite celestial spectacles.

After we collected data on Seamus and fitted him with a GPS tracking collar and a small ear tag, we released him back into the wintery landscape. Our team did not expect to see him again anytime soon; he'd just be a series of new dots on a computer screen each day. However, he circled around to another trap some 15 miles (24 kilometers) away and was caught again four days later, on March 21.

Verifying that his GPS collar looked good, we again released him. Seamus proceeded directly to yet another trap, over 20 miles (32 km) from either of the other two where he'd already gotten a free meal. How he zeroed in on these other traps so capably is a mystery. After being released again, Seamus returned to the same trap and, on March 23, was caught for a fourth time.

Deciding Seamus had received enough free meals, we decided the feast of St. Patrick was over for him! We moved the trap again, about 20 miles north that morning after releasing him. Our new location apparently did the trick, as he's not been seen since … at least in person. His satellite signal continues to show him moving through the foothills of the Brooks Range, out of reach of our traps but occasionally visiting with a female wolverine we also collared, named Jazz. [Photos: Honey Badgers and Other Tiny Predators Caught on Camera]

The data the Wildlife Conservation Society (WCS) is collecting on wolverines is helping us decipher these enigmatic creatures. WCS is working to better understand the habitat needs of wolverines in the Arctic tundra, especially as they relate to snow cover and the earlier spring melt. Wolverines use snow to make their natal dens — as well as to cache food and hide from predators — but few specifics are known about how wolverines choose such sites, or how the changing spring snowpack could affect them or their newborn kits.

In an era of rapid climate change and increased interest in the development of the Arctic, it is imperative that we understand the areas that species like wolverines need to prosper into the future. With that knowledge, land managers can help avoid unnecessary impacts to Seamus and the rest of the wolverines that call this region home.

As we continue to study this canny and poorly understood animal, we have become increasingly impressed with the wolverines' tenacity and ability to survive in this harsh tundra environment. We can't wait to see what more they might teach us. Perhaps Seamus will return to us in our next season, helping us again in exchange for a meal.

The views expressed are those of the authors and do not necessarily reflect the views of the publisher. This version of the article was originally published Live Science.