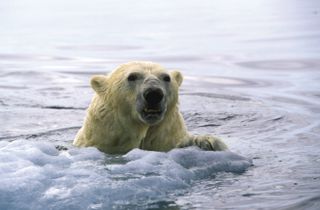 Polar bears can swim for days, covering hundreds of miles of open water at a time, accoding to new GPS tracking data. These long swims appear to be a response to declining summer sea ice in the Arctic, the researchers suggest.

Sea ice provides crucial habitat for polar bears, which hunt for prey, primarily seals, from it. But recent years of warming temperatures have brought significant declines in sea-ice cover over Arctic waters. Scientists worry this decline is causing bear cubs to drown on long swims and creating problems for walruses that also depend on the sea ice.

Over the course of six years, U.S. Geological Survey researchers used GPS collars to track 50 long-distance swims made by 20 adult female bears, some of which had cubs with them. The swims that were documented lasted from 17 hours to nearly 10 days and covered between 33 and 427 miles (54 and 687 kilometers) in the southern Beaufort Sea.

The frequency of the swims appeared to increase over the course of the study, which ended in 2009.

Due to a lack of historical data, it wasn't clear whether these long-distance swims were new for polar bears. However, in past decades there was not enough open water in the southern Beaufort Sea for bears to swim distances like these, according to the USGS.

Of the 20 adult female bears to make the long-distance swims, 12 had cubs when they were outfitted with a collar. Of the 10 recaptured a year later, six still had cubs with them.

"These observations suggest that some cubs are also capable of swimming long distances. For the other four females with cubs, we don’t know if they lost their cubs before, during, or at some point after their long swims," lead researcher Anthony Pagano, a USGS scientist, said in a story published by the USGS.

While the female bears and their cubs appeared capable of swimming long distances in open water, the swims are likely draining. The data suggest that the bears did not pause to rest or eat during the swim.  [Fun Facts About Polar Bears]

The research was published online in the Canadian Journal of Zoology April 27.