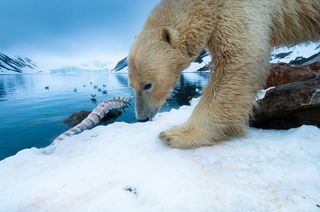 Polar bears have been chilling on the ice far longer than is generally thought, new research suggests, and they probably interbred with brown bears at one point after the two species separated.

The new German study contradicts data from a study published last July in the journal Current Biology that suggested polar bears separated from brown bears 150,000 years ago. The new study analyzed the bears' mitochondrial DNA, a special "additional genome" that lives in the cell's energy factories and is passed down only from the mother. The new study concludes that the bears became separate species closer to 600,000 years ago.

If the polar bears were only 150,000 years old, as suggested by the previous study, they would have had to evolve many specialized traits in a curiously brief time, the German researchers said.

"I've been long puzzled by the suggestion that the polar bears would have been such a miraculous and rapidly evolving species," Frank Hailer of the Senckenberg Nature Research Society in Frankfurt told LiveScience. "I had this lingering question: Is it really true?"

Hailer and his colleagues looked at the polar bear's nuclear DNA, which comes from both parents and is much larger than the mitochondrial genome. [Fun Facts About Polar Bears]

They compared 9,000 base-pair sequences (the chemicals that make up the "rungs" of DNA's ladderlike molecule) from the nuclear DNA of 45 polar, brown and black bears. This comparison let the researchers build a family tree, with the idea that the greater the genetic differences between the species, the farther they were apart in evolutionary time. They were able to estimate when the polar bears and brown bears separated.

The researchers say the mitochondrial DNA data could have come from a hybridization event between polar and brown bears 150,000 years ago during the last warm interglacial period. During that time, sea ice melted and polar bears took to the shores, where they came into contact with brown bears.

The researchers say this hybridization (similar to the hybrid "grolar" or "pizzly" bears seen in recent years in Canada) would have introduced the brown bear mitochondrial DNA into the polar bear population. If the DNA from the brown bears helped the polar bears survive the warm period, it's possible it could have easily spread throughout the population.

This study appears in the April 20 issue of the journal Science.