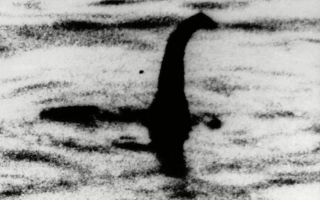 The first supposed "photo" of the Loch Ness Monster taken by a London surgeon in 1934. This later turned out to be a hoax.
(Image: © AP/REX/Shutterstock)

Is the Loch Ness Monster real? Researchers are very doubtful, but they plan to use DNA sequencing just to make sure.

A new project aims to look for foreign, or unknown, DNA sequences that could possibly have been shed by this beast. However, one scientist not involved in the project suggests such a finding would be like spotting a pink unicorn.

The myth of Scotland's famous monster, nicknamed Nessie, has given Loch Ness, a roughly 22-mile-across (35 kilometers) lake with the deepest known point reaching 754 feet (230 meters), a mystical allure. Every year, the myth pulls in thousands of curious folks, most hoping to glimpse the elusive "creature."

While some say Nessie is a myth, others believe that the monster is a living dinosaur similar to a plesiosaur or a sea serpent that somehow survived to this day. According to a Catholic legend, in one of the earliest appearances of the beast, during the sixth century, St. Columba reprimanded Nessie and stopped it from attacking a man. [Image Gallery: Ancient Monsters of the Sea]

Then, in 1934, a London surgeon snapped a photo of a weird black shadow that resembled a long neck jutting out of the water. The photo was published in the Daily Mail, creating hype as the first supposed "photo" of the monster. Decades later, it turned out to be a hoax. Though many other enthusiasts have claimed they've seen Nessie, the creature managed to evade the age of digital cameras and went undetected by drones, sonar beams and satellite tracking.

But will it be able to evade DNA sequencing? (DNA did just catch a serial killer who was at large for over 40 years).

Loch Ness is probably teeming with DNA shed from the creatures that call it home. Animals drop DNA into the environment all the time in the form of skin, urine and feces. Scientists call this genetic information environmental DNA, and they can find it in the air, soil, ice and water, according to the project's website.

An international group of researchers will soon collect this environmental DNA for the first time in Loch Ness. They will take around 300 samples of water from three different depths. They will then extract DNA fragments from the water, sequence the fragments and compare them to  databases of animal DNA that are already known to see if there are any matches — or not.

"I think we will find lots that is news, but it is unlikely we will find anything new that explains the monster myth," said project leader Neil Gemmell, a professor at the University of Otago in New Zealand who hopes this project will yield new species. For example, he said, a recent study in a nearby loch found four new species of brown trout. "If this were solely a monster hunt, I wouldn't be doing it," he added.

Nevertheless, according to Gemmell, the team members will be testing a few Nessie hypotheses, the first being that Nessie is an ancient reptile. To figure out if this could be true, they will compare the DNA from Loch Ness with that of modern reptiles. But Nessie could also be a giant fish, according to another idea, so they will do the same comparison but with known sequences of fish DNA. To test the third idea that Nessie is something "unknown to science but only occurs in Loch Ness," they will compare the environmental DNA samples from Loch Ness with those taken from other bodies of water.

According to a recent study published in the journal Science Advances, environmental DNA detected 44 percent more shark species than any other detection methods in New Caledonia in the Pacific Ocean. "This is a powerful technology for understanding our natural world," Gemmell said.

This system "works across ecosystems from the Arctic to the tropics," said Philip Francis Thomsen, an associate professor of genetics, ecology and evolution at Aarhus University in Denmark, who is not part of the project but who also relies on environmental DNA to map the biodiversity of ecosystems.

The likelihood that an extinct lineage of dinosaurs has survived in the lake is "very, very unlikely, if not to say impossible," Thomsen said. "I mean, they might as well find a pink unicorn."

If they did find a large-bodied animal living in the lake, Thomsen is keener on the "large fish" hypothesis. Though Thomsen doesn't believe for a second that Nessie is real, he is open to being surprised. "Imagine if it was actually real and somebody had good footage of it, I mean, the scientific community would be thrilled," he said. "It's not like, just because we're disbelieving the myth, we wouldn't be interested if it actually was real."

Gemmell thinks that if they don't find anything that could potentially point to a Nessie-like creature, people will continue to believe it anyway, attributing the lack of evidence to the fact that "Nessie was hiding" or "Nessie was on holiday out of the loch." Or even, "Nessie doesn't have DNA because it is mythical/alien."