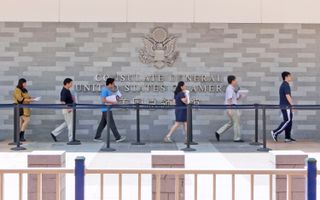 People standing in a queue in front of the U.S. consulate in Guangzhou, China.
(Image: © Freer Law/Alamy)

A U.S. government employee experienced mysterious symptoms after working at a U.S. consulate in China, in a case that's being likened to the so-called "sonic attacks" in Cuba last year.

The employee in Guangzhou, China, "reported subtle and vague, but abnormal sensations of sound and pressure," according to a statement from the U.S. Embassy and Consulates in China. "We do not currently know what caused the reported symptoms and we are not aware of any similar situations in China," the statement said.

The employee reported these symptoms between late 2017 and April 2018 and was later diagnosed with mild traumatic brain injury, the BBC reported.

U.S. officials are advising staff in China to consult a medical professional if they experience any concerning symptoms while working there. In addition, the statement advised, "if you experience any unusual acute auditory or sensory phenomena accompanied by unusual sounds or piercing noises, do not attempt to locate their source. Instead, move to a location where the sounds are not present." [Flying Saucers to Mind Control: 22 Declassified Military & CIA Secrets]

In Washington, D.C., today (May 23), U.S. Secretary of State Mike Pompeo told the House of Representatives Foreign Affairs Committee that "the medical indications [of the China case] are very similar and entirely consistent with the medical indications that have taken place to Americans working in Cuba," the BBC reported.

In 2017, U.S. diplomats in Havana reported hearing loud, bizarre noises and felt movement of the air around them, Live Science previously reported. U.S. officials initially suspected a "sonic attack" on the workers, but a recent study concluded that a sonic weapon was unlikely to be the cause of the diplomats' symptoms. The Havana cases remain unexplained.