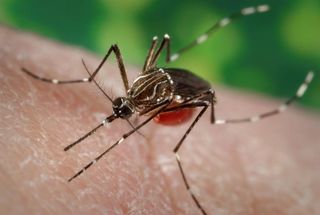 When a mosquito bites you, it doesn't just help itself to some of your blood — it also kindly gives you some of its spit in return. It's this saliva that's responsible for the irritating itch of a mosquito bite, thanks to a concoction of proteins found in it that people are slightly allergic to.

Now, a new study in mice suggests that your immune system could react to these allergy-inducing proteins for up to a week, potentially explaining why an itchy bite lingers so long.

Previous research has shown that the human immune system reacts to mosquito spit. However, it wasn't clear to what extent, because the effects were studied primarily in the immune systems of mice. But in the new study, published today (May 17) in the journal PLOS Neglected Tropical Diseases, the researchers created a close replica of a human immune system in mice. [10 Deadly Diseases That Hopped Across Species]

(The researchers noted that the immune system they created in the mice didn't have every component of a human immune system and that they want to conduct further studies to get a more complete picture.)

In the study, the researchers, from the Baylor College of Medicine in Texas, injected baby mice with human hematopoietic stem cells — which later turn into various types of blood cells, including immune system cells — that were taken from umbilical cords. When the mice grew up and had a well-established "human" immune system, the researchers held an open vial of mosquitoes against the footpads of each mouse. The insects bit each mouse around four times.

By analyzing blood bone marrow, skin and spleen cells from the mice, the researchers found that a number of immune cells remained active even seven days after the mice were bitten.

This was the "most interesting" part of the study — "that the effects lasted that long," said senior study author Rebecca Rico-Hesse, a professor of virology at the Baylor College of Medicine. The methods in this study are novel, she added, "because you can't go around sampling people's spleen and bone marrow after they've been bitten by mosquitoes."

The immune response is complex, Rico-Hesse told Live Science. For example, the levels of cytokines — proteins that help cells communicate during immune responses — sometimes increased and sometimes decreased during the time points the researchers studied. But when the researchers mixed human immune cells in a lab dish with mosquito saliva, they found that cytokines only increased with time.

The new findings show how important it is to look at a more complete picture of the immune system like the one in the so-called humanized mice, Rico-Hesse said. "In the dish, you only have a select subgroup of immune system cells versus the mouse, where all of these cells were interacting and living in correct tissues and developing in different areas like bone marrow and spleen."

Rico-Hesse said that next, she'd like to do a similar experiment but with mosquitoes that are infected with a virus such as Zika or dengue.

"Viruses are probably hitching a ride in some of these immune cells that mosquito saliva is attracting to skin after the mosquito bites," she said. The fact that these cells are being activated for as long as seven days suggests that "viruses might escape immune system" destruction, she added.

Now it comes down to figuring out how this happens. "If we could block the effects of mosquito saliva proteins, it might be possible to "block a whole bunch of different [mosquito-borne] viruses and parasites," Rico-Hesse said.