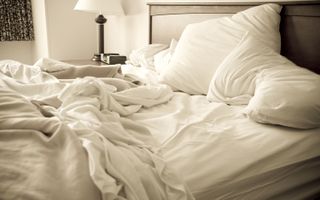 Think your bed is 'cleaner' than a chimpanzee's? Think again.
(Image: © Shutterstock)

When you burrow under your blankets and snuggle up to your pillow in bed, you're never alone — the trillions of microbes that make up your microbiome are right there with you, and many of them are left in your bed even when you aren't there.

As it turns out, human beds are teeming with more body microbes than the beds of chimpanzees, according to a new study.

Researchers recently investigated the microbial communities in chimps' tree beds, to better understand their relationship with the microbes and arthropods that inhabit their bodies and their forest habitats. In doing so, they made an unexpected discovery: Body microbes that were plentiful in human beds were mostly absent in chimp nests. [Microbiome: 5 Surprising Facts About the Microbes Within Us]

Of the microbes in our beds, about 35 percent come from our own bodies, "including fecal, oral and skin bacteria," study lead author Megan Thoemmes, a doctoral candidate at North Carolina State University, said in a statement.

"We wanted to know how this compares with some of our closest evolutionary relatives, the chimpanzees, which make their own beds daily," Thoemmes added.

Chimpanzees (Pan troglodytes) spend more than half their lives in their nests, and they rely on these beds not only for comfortable sleeping, but as protection against wind, rain and predators, the study authors reported. To make these cozy nests, which are typically used once and then abandoned, chimps weave together a foundation of branches, topping them with a leafy mattress.

The researchers suspected that these beds also hosted plenty of microbes, from the chimps' own bodies and from the forest around them. They swabbed 41 chimp beds in western Tanzania's Issa Valley to collect samples of their microbial diversity, and they hoovered up arthropods — insects and arachnids — from 15 nests.

Based on the known bacterial composition of human beds, the scientists expected to see a similar distribution of microbes in the chimpanzee nests, anticipating that the microbial diversity would be somewhat lower than in the environment around them, and that body microbes would be significantly represented.

Instead, they found that environmental bacteria dominated the nests, while the oral, skin and fecal bacteria that are so common in human beds were "almost entirely lacking" in chimpanzee beds, the scientists reported. In fact, none of the five most common species of fecal bacteria in chimps was found in any of the nests.

By comparison, our own living spaces, which are largely isolated from the microbes in the landscape around us, are instead populated by the microbes we produce ourselves.

"To put it simply, we have created sleeping places in which our exposure to soil and other environmental microbes has all but disappeared, and we are instead surrounded by less diverse microbes that are primarily sourced from our own bodies," the scientists wrote in the study.

The absence of body bacteria in the chimp beds supports a hypothesis suggested by prior research — that chimpanzees' habits of abandoning their beds provide an important benefit to the primates. By building new nests night after night, chimps reduce the likelihood of bacteria and pest buildup, as a dirty nest would be unhealthy for the chimps and could attract predators, the study authors reported.

The findings were published online yesterday (May 16) in the journal Royal Society Open Science.