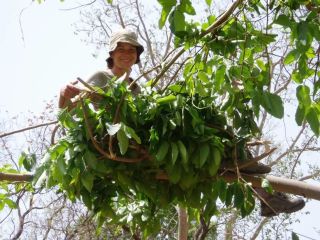 Every night, wild chimpanzees build themselves nests high in the trees and tuck themselves in for a good night's sleep. But no one knows exactly what makes these nests good sleeping spots for chimps. So biological anthropologist Fiona Stewart decided to find out — by bedding down in the chimp nests herself.

Stewart, a research fellow at the University of Cambridge, found that the shaggy arboreal assemblages in her field site in Tanzania weren't exactly five-star lodgings, but they did keep her temperature up and the bug bites down. Sleeping high above ground also eased the anxiety of hearing hyenas call to each other in the East African night.

Stewart "is a very adventurous person," said William McGrew, Stewart's former doctoral adviser and a professor of archaeology and anthropology at the University of Cambridge. Her findings could help explain why early humans broke from the chimp tradition of sleeping in trees, McGrew said. [10 Things That Make Humans Special]

Stewart was not available for comment, as she has returned to Tanzania to do fieldwork.

Chimp nesting is a common behavior, McGrew said, but anthropologists haven't been able to directly test why they do it, because it's neither easy nor ethical to try to control where wild chimps decide to sleep.

"People have been studying these constructions for about 80 years, since the 1930s, and the standard way to do it is to stand on the ground and to look with binoculars up to the trees," McGrew told LiveScience. "Fiona is the only person who has actually said, 'No, let's get first-hand experience.'"

For six nights in 2007 and 2008, Stewart climbed 5 to 29 feet (1.5 to 8.8 meters) into the trees, either crashing in pre-used chimp nests or building nests using chimpanzee techniques. She spent another five nights sleeping on the bare ground.

At first McGrew worried about Stewart rolling out of the nests, he said, but it turns out they're built in a secure cup shape that makes falling out difficult.

"They're interwoven, they're spring-loaded," McGrew said of the nests, which chimps teach each other to build. "It has, essentially, the bed, the mattress, the lining, the pillow. It's a clever device."

As she slept, Stewart wore data-logging thermometers on her front and back to record the temperature every 15 minutes throughout the night. She kept a tape recorder next to her so she could whisper quick notes each time she woke during the night. She also counted her insect bites to find out if sleeping in the trees keeps the bed bugs away.

Stewart found that neither the nests nor the ground provided undisturbed sleep, but she slept for longer stretches of time in the nests. Part of the reason was that the calls of dangerous animals such as hyenas were more anxiety-provoking on the unprotected ground — though "snakes were always a concern," she wrote online Aug. 11 in the American Journal of Physical Anthropology.

Sleeping up high kept the bugs away, however, with Stewart getting a median count of 28 bites a night while snoozing on the ground versus a median count of one bite on nesting nights. Nesting kept Stewart warmer, as well, especially on the coldest nights.

The findings confirm some of anthropologists' theories on the benefits of nesting, McGrew said. They might also add insight into the question of why early hominids came down from the trees and took to sleeping on the ground. [Read: Our Closest Living Relative, the Chimp]

"For example, it has been speculated that our ancestors were able to stay on the ground overnight when they had fire," McGrew said. "Both because fire is a deterrent for predators and because it also offers heat."

The next step, McGrew said, is to compare chimpanzees that build nests in the trees with chimps who sometimes camp out on the ground. Differences in those groups might hint at the early evolution of ground-based shelter in humans. For example, McGrew said, chimps might only sleep on the ground in areas where there are no predators around.