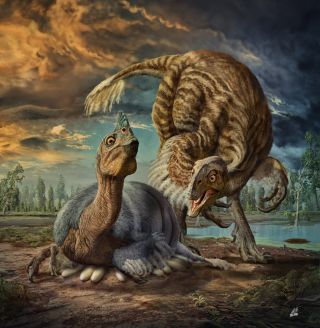 Imagine a giant, bird-like dinosaur that was so heavy, it weighed as much as a modern-day rhinoceros. Given its heft, how did this bulky, feathered beast sit on its eggs without crushing them to smithereens?

If your immediate response is "carefully," that's a good start, but a new analysis takes a deeper dive. These small-to-humongous dinosaurs, known as oviraptorosaurs, laid their oval eggs in a doughnut-like circle, and these nests had different shapes depending on the size of the dinosaur.

"Oviraptorosaurs appear to have adapted to being able to sit on their clutches, even at giant body size," study co-author Darla Zelenitsky, an assistant professor of paleontology at the University of Calgary in Alberta, Canada, told Live Science.

However, no birds alive today practice this trick. (Birds evolved from theropod dinosaurs, which were mainly meat-eating, bipedal beasts such as oviraptorosaurs and Tyrannosaurus rex.)

Nearly all species of modern birds sit on their eggs, Zelenitsky said.

"The largest birds, however, are much smaller than the largest oviraptorosaur," Zelenitsky said.

Oviraptorosaurs were bizarre-looking dinosaurs. They had parrot-like heads and toothless beaks, and some sported head crests, much like modern cassowary birds do. These dinosaurs ranged in size from a few dozen pounds (Nomingia, for instance, weighed about 80 lbs., or 37 kilograms) to a few thousand pounds (Gigantoraptor weighed up to 4,400 lbs., or 2,000 kg).

Over the years, researchers have found many well-preserved oviraptorosaur eggs and skeletons, including fossils of oviraptorosaur parents sitting on their nests. (Technically, the nests themselves didn't fossilize, so scientists call the preserved eggs a "clutch." But, for simplicity's sake, we'll refer to them as nests.)

The nests the researchers examined, about 40 in all, were between 100 million and 70 million years old, Zelenitsky said.

"Oviraptorosaurs seem to have been very picky about how their eggs were arranged in the nest," she said. This proved helpful, because it allowed the researchers to accurately measure the diameters of the entire nests, as well as the doughnut holes in the middle, Zelenitsky said.

The diameters of the entire nests ranged from about 16 inches (40 centimeters) for the pint-size oviraptorosaurs under 88 lbs. (40 kg) to nearly 11 feet (3.3 meters) for the 3,300-lb. (1,500 kg) beasts, Zelenitsky said. After measuring the doughnut holes in the center, the researchers found that smaller oviraptorosaurs sat either directly on their eggs or in a small hole in the center of the nest. Meanwhile, the bigger dinosaurs placed their eggs in a ring farther from the center of the nest, meaning oviraptorosaurs may have had little contact with the eggs when they sat down.

"This egg-free opening in clutches became larger with increasing species size," Zelenitsky said. "In the largest species, the opening, rather than the eggs, occupied most of the clutch area."

These doughnut holes allowed the adult oviraptorosaurs to sit in the nest and maybe even touch the eggs — perhaps allowing the animals to protect, shelter and provide heat for their developing babies. However, if keeping the eggs warm was the goal, this strategy may have been lacking, the researchers noted.

The study will be published online Wednesday (May 16) in the journal Biology Letters.