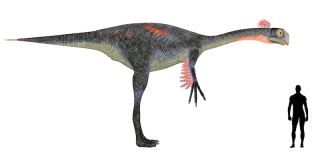 A comparison with an adult Gigantoraptor with a male human.
(Image: © Sofia Santos/Shutterstock)

A gigantic bird-like dinosaur weighing as much as a car towered over its relatives about 70 million years ago, a new finding suggests. The unearthed beaked dinosaur was not full-grown, yet it tipped the scales at more than 3,000 pounds. Paleontologists who discovered its remains estimate the behemoth was just 11 years old when it perished. Chinese scientists unearthed the skeletal remains of the dinosaur, now named Gigantoraptor erlianensis, in the Erlian Basin of Inner Mongolia, China. Oddly large At up to 16 feet tall and 26 feet long, Gigantoraptor dwarfed its relatives, a group of small, feathered theropods called Oviraptorosaurs. The hefty dinosaur weighed 35 times more than other Oviraptorosaurs. “It’s one thing to find a big dinosaur,” said Matthew Lamanna, assistant curator of vertebrate paleontology at the Carnegie Museum of Natural History, “but it’s another thing to find a big dinosaur from a lineage that was thought to be small.” Lamanna was not involved in the discovery. In addition to its size, Gigantoraptor sported several bird-like features, such as a longer arm and more avian-like leg, not present in its relatives. The scientists say this finding sheds light on theropod (two-legged carnivorous dinosaurs) evolution leading to the emergence of birds. Xing Xu of the Chinese Academy of Sciences in Beijing and Lin Tan of the Long Hao Institute in China, as well as their colleagues, discuss the finding in the June 14 issue of the journal Nature. Oddly shaped Gigantoraptor was also much ganglier than other dinosaurs. Typically, larger dinosaurs had proportionally stouter limbs and shorter lower legs than their smaller relatives. Relative to its size, Gigantoraptor had unusually slender limbs and lengthy legs. “It increases our conception of the diversity of dinosaurs,” Lamanna told LiveScience. Based on its close relationship to other feathered species, Gigantoraptor likely had feathers on its tail and arms, which were used as a display. While body-covering feathers act as insulation, and would have been necessary for the smaller dinosaurs, Gigantoraptor probably didn’t need such a cold protector, the scientists suggest. “It’s unexpected discoveries like this that show, ‘Hey we know a lot about dinosaurs but there’s still so much left that we don’t know,’” Lamanna said.