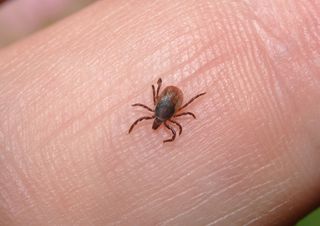 Illnesses from mosquito, tick and flea bites are on the rise in the United States, according to a new report from the Centers for Disease Control and Prevention (CDC).

What's more, nine germs spread by these insects — including Zika virus and chikungunya virus, which spread by mosquitoes, and babesiosis, which spreads by ticks — were discovered or introduced to the U.S. during the study period, according to the report. [5 Weird Effects of Bug Bites]

"Illnesses from mosquito, ticks and flea bites continue to impact our nation," and the threat of disease is increasing, Dr. Robert Redfield, the CDC director, said in a news conference today (May 1). "It will take all of us working together to prevent and control diseases" from these insects, he said. "There is a role for everyone."

The only reportable illness spread by flea bites is plague, which is still relatively rare in the United States, causing between three and 17 cases each year during the study period, the report said.

What's behind the rise in vector-borne diseases?

There are several factors behind the increase in these diseases, the researchers said. For example, rising temperatures will tend to expand the range of ticks farther north, thereby expanding tick season, "which puts people at risk for a longer time," Dr. Lyle Petersen, director of the CDC's Division of Vector-Borne Diseases, said at the news conference.

When asked if the temperature increases were due to climate change, Petersen declined to comment, telling reporters, "that's the job of meteorologists." However, a 2016 report from the U.S. Global Change Research Program found evidence that climate change has contributed to the expanding range of ticks.

Other factors, including an increase in international travel and more people living near wildlife, also affect the spread of these diseases, Petersen said. And the germs that have been discovered in recent years also add to the number of reported vector-borne diseases in the United States, the CDC said.

The researchers noted that these illnesses often go unreported; for instance, a person may have contracted Zika or West Nile virus but have never gone to the doctor. And so, the true number of cases of these diseases is likely much higher than reported.

Government efforts to prevent vector-borne diseases include the funding of states and territories to detect and respond to infections and the development of improved diagnostic tests, vaccines and treatment for these diseases, the CDC said.

People can protect themselves from insect bites by using Environmental Protection Agency-registered insect repellent, wearing long-sleeved shirts and long pants, and taking steps to control ticks and fleas on pets, the CDC said.