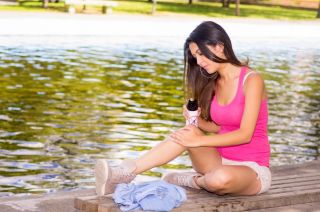 As the weather warms up and you head outdoors, remember, humans are not the only species to delight in such balmy days: Summer is also a busy season for pesky insects that can bite or sting you, or even transmit a disease.

Fortunately, you can take steps to protect yourself from being bitten up by eager mosquitoes, ticks or flies.

One important strategy is to avoid those times when biting insects are most active, whenever it's possible, said Jonathan Day, a professor of medical entomology at the University of Florida/IFAS Florida Medical Entomology Laboratory in Vero Beach. Mosquitoes are most active right before sunrise and around sunset, he said.

But in the summer, dawn and twilight are also popular times for people to take a walk or have a barbecue, Day said. In that case, you can tell mosquitoes to buzz off by covering up as much exposed skin as possible with clothing, Day suggested. Wear breathable fabrics that have a tight weave and are comfortable in hot and humid conditions, he said. [5 Natural Ways to Keep Bugs at Bay]

Even when you're wearing protective clothing and avoiding peak activity times, however, some areas of the skin will remain exposed to biting insects, such as the neck, forehead, cheeks, wrists and ankles. That's where an effective insect repellent comes into play, Day told Live Science.

Insect repellents are useful against any blood-feeding arthropods, which include mosquitoes, ticks, chiggers and fleas, Day said. Repellents are also partially effective against horseflies and deerflies, which have an annoying tendency to fly around people's heads, he said.

Insect repellents will not work on any stinging insects, such as bees, hornets and wasps, Day said.

Insect repellents may be sold as sprays, lotions, sticks, foams and wipes. When you're looking for a reliable repellent, Day suggests that you should consider the following points:

1. The Centers for Disease Control and Prevention recommends that you use products containing one of three active ingredients — synthetic chemicals, such as DEET; picaridin; or plant-derived chemicals, such as oil of lemon eucalyptus — provide the longest-lasting protection. (The chemical names for DEET may be listed on the product label as the ingredients N,N-diethyl-m-toluamide or N,N-diemethylbenzamide.) Read product labels carefully, because not everyone should use every product: They may say that oil of lemon eucalyptus should not be used on children under age 3 or that products containing DEET should not be used on infants under 2 months of age.

3. Most repellents have chemicals in them that can be irritating to the skin as well as to areas close to the eyes, ears, nose and mouth. To keep irritation to a minimum, Day suggests using a lower-concentration DEET product or some other product. Also, when you're applying bug spray to your face, first place the repellent on your hands, and then use your hands to put it on your face, Day said.

5. Studies have found that alternative repellents containing plant-based ingredients, such as citronella, geranium oil or vanilla, may only provide about 20 minutes of complete protection, Day said. People who want to use these products may need to reapply them more often, he recommended, and you should be careful even when you're applying these plant-based chemicals near your ears, eyes, nose and mouth, because they also can be irritating to your skin.

6. You may have to take a slightly different strategy than you take with mosquitoes when you want to prevent tick bites. When Day goes to a place with a high density of ticks, he wears long sleeves to cover up exposed skin, puts his pant legs into his socks and then applies repellent to his boots and socks, he said. "Ticks can get onto shoes and pant legs, then crawl up a person's body," he said.

7. Read the label to make sure the product protects against the specific insect you want to repel. Some repellents are not formulated to work against certain insects.

8. Avoid products that combine insect repellent and sunscreen, because mixing these two products on your own reduces the effectiveness of both of them, Day said. In addition, when you need sunscreen, it's usually during those times of day when mosquitoes are not that active, he said.

9. On the other hand, the following methods are ineffective ways to repel mosquitoes: ultrasound devices attached to a belt or installed in a yard, wristbands containing repellent and citronella candles, Day said. He said that repellents work by providing a protective layer on the skin or body that insects need to make contact with. Repellent found in a wristband that's worn on one arm does a poor job of preventing a person from getting bitten on that arm or on skin elsewhere, according to research from Consumer Reports. Placing a citronella candle on a patio deck, for example, may only provide protection in one quadrant of the deck, and mosquitoes would go around this one area and into the three other quadrants that don't contain citronella, Day said.

In addition, some people swear that eating certain foods, such as garlic or bananas, or taking a dietary supplement like vitamin B12, will ward off biting insects, Day said. But there's no evidence that any food or supplement can help prevent insect bites, he said.