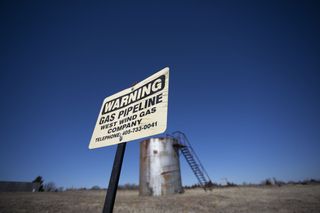 A cluster of earthquakes in Oklahoma earlier this month helped push the state to 62 temblors this year alone of magnitude 3.0 or more — and 2,724 of that magnitude or more since 2010.

This year is on track for a huge decline from the peak of Oklahoma's restlessness in 2015, when the state felt a staggering 903 quakes of magnitude 3 or greater. But it's also a far cry from Oklahoma's norm before 2009, when the state recorded an average of one or two magnitude 3.0 or more earthquakes each year.

The rapid rise in quakes and subsequent fall bolsters the findings that Oklahoma's foundations are moving because of oil and gas activities, said Jeremy Boak, the head of the state's geological survey. Specifically, Boak told Live Science, most quakes are due to the injection of large amounts of wastewater from wells into subterranean rock layers. A few localized quakes are likely the direct result of fracking, in which underground charges are set off to puncture rock and improve the flow of oil and gas into a well. As Oklahoma regulators have limited the amount of wastewater that oil and gas operators can inject underground, quakes have fallen off, Boak said. But they haven't vanished. "Earthquakes are nothing if not episodic," Boak said. "They come in bursts." [The 10 Biggest Earthquakes in History]

These bursts — and the lag between wastewater injection and when the earth shakes — can make Oklahoma feel like a rollicking place, despite the overall decline in quakes since 2015. The state's largest recorded quake, a 5.8-magnitude temblor that jostled the city of Pawnee in September 2016, happened after wastewater-injection regulations were put into place a year prior, pointed out Thomas Gernon, a professor of Earth sciences at the University of Southampton who has studied Oklahoma's seismicity.

Wastewater injection causes earthquakes by relieving pressure on deep faults in the basement rock below Oklahoma's layers of sedimentary rocks. When fossil fuel companies develop "unconventional" oil and gas — resources that require more complex extraction than simply drilling straight down — they often bring up some amount of brackish groundwater as an unwanted byproduct. In Oklahoma, operators typically dispose of this wastewater by injecting it back underground, most commonly into a deep sedimentary rock layer known as the Arbuckle.

In most places in Oklahoma, the Arbuckle sits right over what geologists call the basement — a layer of non-sedimentary rock that's mainly granite. And therein, geoscientists say, lies the problem. A boom in unconventional oil and gas drilling in Oklahoma nearly doubled the amount of wastewater injected underground in central Oklahoma between 2004 and 2008, according to a 2014 article in the journal Science. It turns out that this wastewater can travel into the basement rock, which is crisscrossed with faults. The water decreases the pressure that tends to hold the fault together, Boak said, making it easier for the fault to slide, causing an earthquake.

There is a lag between the time that the water is injected and when the fault slips, Gernon said. The lag varies and is not well understood, but it's often on the order of about six months to a year. That can make it difficult to correlate quakes to a specific well or activity.

Though many geoscientists, like Boak, are optimistic about the declining levels of earthquakes, it's hard to predict Oklahoma's future on the shake scale. [See Images of This Millennium's Destructive Earthquakes]

One challenge, Boak said, is that as the quakes decline, it's hard to tell how many of the ones happening now are simply echoes from previous injection activities — and how many are caused by new or ongoing wastewater injection.

"One model out there says that once below a certain threshold [of injection], we're just getting earthquakes from the dying away of that pulse" of old activity, Boak said. Other models, he added, are not as optimistic.

Part of the problem is that the relationship between "wastewater injected" and "earthquakes that happen" is a moving target. If the rock layers where the wastewater goes are like a sponge, that sponge can eventually fill, forcing the wastewater to travel farther along its underground networks, potentially causing more quakes at greater distances.

"You might inject quite a small amount in the right place, and it might have quite a large consequence," Gernon said.

In a study published in the journal Science in February, Gernon found that it's not just the volume of water injected that matters, but also the depth of the wells. The closer to the basement rock, the greater the risk of quakes. So far, state regulators have focused on regulating how much wastewater operators can stick underground, not how deep they go.

"It is a complex interplay," Gernon said. Regulations should account for the local geology, including the orientation of faults and the permeability of rock, as well as the depth of the rock layers, he said.

Many companies have pulled out of injecting into the Arbuckle and moved into shallower formations, Boak said, and Oklahoma Geological Survey researchers are hoping to explore the effects of those decisions. It looks likely that the shallower wastewater- injection wells won't create new seismic problems, he said, but geologists want to be sure.

The Oklahoma Geological Survey is also interested in investigating a smaller group of quakes that are caused directly by fracking. Most of those quakes are localized in two places, the South Central Oklahoma Oil Province (SCOOP), which is in the south-central part of the state, and the Sooner Trend Anadarko Canadian and Kingfisher (STACK) play, which is closer to the geographical center of the state. The quakes caused by fracking in this area are very weak, Boak said, but because they are centered in shallow sediments, the shaking can feel strong at ground level.

"A lot of our focus will be in the future on these frack-related earthquakes," Boak said. "There are at least a few places where we aren't sure [the seismicity] is decaying away fast enough to keep us happy."

Editor's Note: The reporter's spouse is employed by an oil and gas company that operates within Oklahoma.