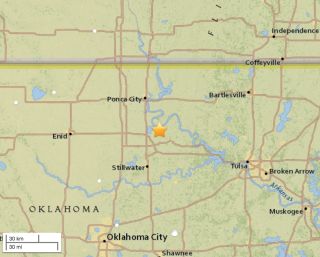 The earthquake that shook Pawnee, Oklahoma, on Sept. 3 is now the state's largest temblor on record, according to the U.S. Geological Survey, which just upgraded the magnitude to 5.8.

The earthquake was previously pegged at magnitude 5.6. But further analysis of the seismic recordings from the event found the quake size to have a bigger moment magnitude, according to the USGS. (Moment magnitude, which is based on the total energy released by the event, is considered a more accurate measure of magnitude than that of the now rarely used Richter scale, the USGS says.)

"Changes in estimated magnitude for an earthquake are common in the hours-to-days following the event, as more data are analyzed in greater detail than is possible in the first minutes after the earthquake occurs," according to a USGS statement. [The 10 Biggest Earthquakes in History]

The USGS also ticked up the magnitude of the Nov. 6, 2011, quake that shook an area near Prague, Oklahoma; the previously estimated 5.6 is now a magnitude 5.7. That quake, which was felt in 17 states, injured two people and destroyed more than a dozen homes, according to the USGS.

The Pawnee earthquake may be the largest ever recorded in Oklahoma; but comparing current recorded magnitudes with those in the past can be tricky, since seismic instrumentation has "vastly improved" in the past few decades, the USGS said.

Even so, Oklahoma has experienced more earthquakes of late. And in May 2014, the USGS and the Oklahoma Geological Survey sounded a rare alarm. They issued an earthquake warning for the first time in any state east of the Rockies. The agencies warned that the risk of a damaging earthquake (larger than magnitude 5.0) had increased significantly in central Oklahoma.

Humans most likely are to blame. Over the past seven years, Oklahoma and other states in the central and eastern U.S. have experienced an uptick in the number of induced earthquakes, or those caused by human activities, according to the USGS. "Since 2009 rates in some areas, such as Oklahoma, have increased by more than an order of magnitude," the USGS said.

Research has suggested much of the increased seismic activity is linked to wastewater from oil and gas production being injected into wells deep underground, according to the USGS. Other human activities like hydraulic fracturing (also used in oil and gas production) may also trigger these earthquakes.

Due to such human activities, the central and eastern United States are now at risk of earthquakes with the same magnitude as those that occur naturally in California, a USGS report released in March revealed.

In that report, scientists calculated that north-central Oklahoma and the southernmost part of Kansas were the two spots in the region with the greatest risk of experiencing a human-induced earthquake.