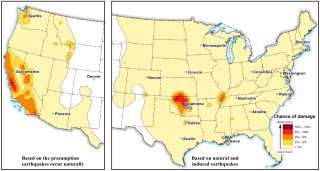 This USGS map shows the potential for an area to experience damage from natural or human-induced earthquakes in 2016.
(Image: © USGS)

The chances of a damaging earthquake occurring in parts of Oklahoma and some neighboring states are just as likely as they are in temblor-heavy California, according to a report by the U.S. Geological Survey (USGS).

The culprit? Man-made activities related to oil and gas production are creating the shaky conditions in a region of the central and eastern U.S., the USGS seismologists say.

USGS scientists just released their first map that includes earthquake risks from both natural and human-induced causes for the coming year. Until now, the government agency included only temblor risks linked to natural causes.

The report, which is part of a 50-year forecast examining earthquake hazards, reveals that about 7 million people live and work in areas at risk of human-induced seismicity. Areas in the central and eastern U.S. (CEUS) are at risk of experiencing a quake of the same magnitude as those that occur naturally in California, the USGS said. [Image Gallery: This Millennium's Destructive Earthquakes]

"By including human-induced events, our assessment of earthquake hazards has significantly increased in parts of the U.S.," Mark Petersen, chief of the USGS National Seismic Hazard Mapping Project, said in a statement. "This research also shows that much more of the nation faces a significant chance of having damaging earthquakes over the next year, whether natural or human-induced."

The CEUS' induced earthquakes are often the product of wastewater disposal, the USGS said. This wastewater comes from oil and gas production, when it is pumped into underground wells deep in the Earth. This is different from hydraulic fracturing, also known as fracking, in which water, sand and chemicals get pumped into the Earth to break up rock and extract oil and gas. The actual fracking is probably a more infrequent cause of felt earthquakes, the USGS said. (Wastewater from fracking is generally pumped back into wastewater injection wells.)

Still, wastewater injection practices have put six states on the earthquake map. Oklahoma has the highest risk, followed by Kansas, Texas, Colorado, New Mexico and Arkansas, the USGS reported. Oklahoma and Texas have the largest populations living near induced-earthquake hotspots.

"In the past five years, the USGS has documented high shaking and damage in areas of these six states, mostly from induced earthquakes," Petersen said. "Furthermore, the USGS Did You Feel It? website has archived tens of thousands of reports from the public who experienced shaking in those states, including about 1,500 reports of strong shaking or damage."

And through mid-March of this year, 226 earthquakes of a magnitude 3.0 or higher have already hit the central United States, the USGS said. The largest earthquake to occur near a wastewater injection site was a magnitude-5.6 temblor near Prague, Oklahoma, in 2011.

Overall, USGS researchers found 21 areas with increased rates of human-induced seismicity. Some areas — such as regions within Alabama and Ohio — experienced human-induced earthquakes in the past, but have relatively little risk in the coming year because the activities that caused these quakes have decreased.

But other areas of Alabama and some parts of Mississippi have shown an increase in these activities. But researchers are still determining whether earthquakes in these areas happened naturally or were human-induced, the USGS said.

The scientists found the greatest risk of a human-induced earthquake in north central Oklahoma and the southernmost part of Kansas. They calculated that there is a 10 to 12 percent risk that an earthquake with strong shaking will occur in those areas this year. Such an earthquake, they estimated, would register a 6 or greater on the Modified Mercalli Intensity scale, meaning it would easily be felt but would likely cause just slight damage. This translates into about a 5.0 on the Richter scale.

Though scientists disagree about whether wastewater injection leads to larger or smaller earthquakes compared with natural ones, in the CEUS region, when a large temblor does strike, thousands of faults could rupture, according to the USGS. What's more, human-induced quakes tend to come in swarms of smaller events at shallower depths, whereas shaking is more likely to be felt and cause damage.

The new earthquake report will help architects determine how to safely design buildings within areas of high risk. People who live in earthquake territory can read about safety measures at FEMA's Ready Campaign.