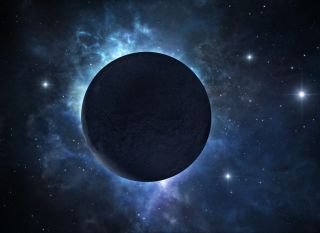 This is not an image of the newfound dark planet, which swallows up too much light to be visible to human observers.
(Image: © Yuriy Mazur/Shutterstock)

There's a planet the size of Jupiter whipping around a star 466 light-years away from Earth, and it might be the color of plums, or dying embers or, well … just about anything else.

Researchers don't know for sure, because the massive, gassy world is one of the darkest planets astronomers have ever detected. According to a new paper posted April 17 in the preprint journal arXiv, the planet known as WASP-104b is "darker than charcoal" and may swallow up to 99 percent of the light its local star sheds upon it. [9 Most Intriguing Earth-Like Planets]

"From all the dark planets I could find in the literature, this is top five-ish," study author Teo Mocnik,  a researcher at Keele University in Staffordshire, England, told New Scientist. "I think top three."

(The darkest planet discovered so far is the pitch-black exoplanet TrES 2B, or Kepler-1b, located about 750 light-years away, which absorbs more than 99 percent of the light that hits it.)

Mocnik and colleagues did not discover WASP-104b (it was first described in 2014), but they did bring its impressive darkness to light after poring over data provided by the Kepler Space Telescope.

Because they could not actually see WASP-104b directly, the researchers studied the planet via the transit method, which involves measuring the minute dimming of a distant star as a planet passes in front of it. Other observations — like the subtle gravitational wobbling WASP-104b inflicts on its host star — helped Mocnik and his colleagues describe the mysterious exoplanet in detail. (Their paper has yet to be accepted by a peer-reviewed journal.)

Planets like WASP-104b are called hot Jupiters, meaning they're about as massive as Jupiter but with one scorching twist: Hot Jupiters orbit extremely close to their host stars, resulting in searing surface temperatures. In the case of WASP-104b, the planet is so close to its star that it completes a full orbital rotation once every 1.76 days.

Counterintuitively, the planet's proximity to its sun might hold the key to the world's extreme darkness. Like Earth's moon, WASP-104b is tidally locked, meaning one face of WASP-104b is always facing its host star, with the opposite one always facing away. As a result, one side of the planet experiences permanent day, while the other side is trapped in endless night.

The darkness of the planet's nightside is easy to understand. The dayside of the planet, meanwhile, is probably too soaked in stellar radiation for clouds or ice to ever form, the researchers wrote. Not only do clouds and ice brighten a planet by reflecting light outward, but they can also form a sort of ceiling above light-absorbing elements in the planet's atmosphere.

WASP-104b is thought to have a thick, hazy atmosphere rich in atomic sodium and potassium, which can absorb many colors in the visual spectrum.

The result is a planet that absorbs somewhere between 97 percent and 99 percent of all the light that hits it. But while WASP-104b might appear blacker than coal, it likely has a distinct underlying color that Earthbound observers just can't perceive. Incoming solar radiation probably causes the planet to glow — maybe dark purple like a bruise or red like an ember, Mocnik told New Scientist — but from our seats 466 light-years away, we just can't tell.

Editor's Note: This story was updated to correct the location of WASP-104b. It is 466 light-years, not 466 million light-years, away from Earth.