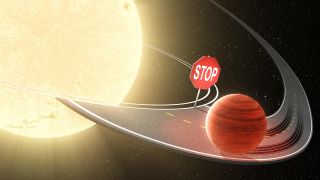 The inward migrations of "hot Jupiter" exoplanets stop when their orbits are circularized by their parent stars' gravity, researchers say.
(Image: © NASA/JPL-Caltech)

The inward migration of gas-giant exoplanets known as "hot Jupiters" tends to halt before they spiral down to their doom, researchers said.

"Eventually, all hot Jupiters get closer and closer to their stars, but in this study we are showing that this process stops before the stars get too close," lead author Peter Plavchan, of NASA's Exoplanet Science Institute at Caltech in Pasadena, said in a statement. "The planets mostly stabilize once their orbits become circular, whipping around their stars every few days." [The Strangest Alien Planets]

Hot Jupiters are similar to planets such as Saturn and Jupiter in mass and composition. These exotic worlds form relatively far away from their stars, as our solar system's gas giants did, but then move inward over time in a process that remains poorly understood.

We're fortunate that Saturn and Jupiter didn't do this, for such migrations can boot smaller, rocky planets out of the way, sometimes ejecting them out of the solar system entirely, scientists say.

What could halt inward migrations, allowing hot Jupiters to survive in their close-in orbits, has also been mysterious. Scientists have offered up three main theories, with the first positing that the host star's magnetic field serves as a barrier.

The second theory suggests that hot Jupiters stop migrating when they reach a different roadblock — the end of the dusty part of the newborn system's planet-forming disk.

"This theory basically said that the dust road a planet travels on ends before the planet falls all the way into the star," co-author Chris Bilinski of the University of Arizona said in a statement. "A gap forms between the star and the inner edge of its dusty disk where the planets are thought to stop their migration."

Plavchan and Bilinski put these theories to the test by studying 126 confirmed exoplanets, along with more than 2,300 candidate worlds (most of them spotted by NASA's Kepler space telescope) of many different sizes and orbital characteristics. Specifically, they looked at how these planets' orbital distances varied according to the masses of their host stars.

"When only a few hot Jupiters were known, several models could explain the observations," Kepler scientist Jack Lissauer of NASA's Ames Research Center in Moffet Field, Calif., who was not affiliated with the study, said in a statement. "But finding trends in populations of these planets shows that tides, in combination with gravitational forces by often unseen planetary and stellar companions, can bring these giant planets close to their host stars."

The study was published last month in the Astrophysical Journal.