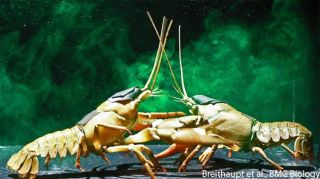 The urine that female American signal crayfishes (Pacifastacus leniusculus) spray out triggers courtship behavior in males. The males attempt to mate only after they catch a whiff, experiments revealed, with it driving them into a sexual frenzy.

However, as they unleash this seductive aphrodisiac, the females are typically fighting males, researchers found.

The males actually use urine as a signal for violence, releasing it when they fight other males. The females essentially issue it as an invitation and challenge.

So why send conflicting signals? By stimulating aggression in males, females can best gauge male size and strength, thereby ensuring only the fittest partners will father their offspring, scientists reason.

So why use urine?

"Most probably because urine provides uncheatable information," said researcher Thomas Breithaupt, a behavioral ecologist at the University of Hull in England.

Animals often bluff about their prowess — male Australian slender crayfish (Cherax dispar) often bluff opponents with large claws that aren't actually stronger than normal, for instance. However, urine contains byproducts of physical processes that can serve as vital clues about their fighting power.

"Many animals, including mice, dogs, elephants, fish and crustaceans, use urinary signals for communication," Breithaupt noted. "Urine provides a great source, perhaps the best source, of crucial information about other animals — sex, dominance, species, individual identity, sexual receptivity, illness. The study of urine communication tells us a great deal about the mechanisms and evolution of animal communication in general."

Aside from learning more about animal communication, female sex pheromones isolated from the animals' urine "could be used for the control of invasive crayfish species," Breithaupt said. "The signal crayfish is invasive in the UK and causes lots of damage to the river ecosystems by destroying river banks and by carrying a fungus, which is lethal to the native crayfish species, the white clawed crayfish (Austropotamobius torrentium)."

Breithaupt and his colleague Fiona Berry detailed their findings online March 30 in the journal BMC Biology.