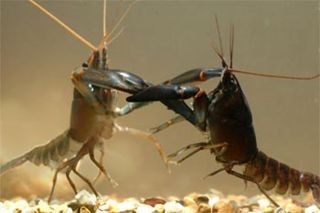 Male slender crayfish (Cherax dispar) can engage in extended and bruising fights that can result in losing a limb or death.
(Image: © Anthony OÃ¢â‚¬â„¢Toole.)

A male crayfish with larger-than-normal claws typically needs only to flash his menacing weapons to drive opponents away. Now researchers find these critters are frequently bluffing—the enlarged claws often aren't stronger at all. These findings raise the question of how often males in the animal kingdom are just bluffing with their natural weaponry. "Dishonesty during disputes may be far more prevalent that we previously imagined," said researcher Robbie Wilson, a zoologist at the University of Queensland in Australia. Death or dismemberment Wilson and an international team of researchers investigated the Australian slender crayfish (Cherax dispar). The small, lobster-like crustaceans are extraordinarily aggressive beasts, with combat often resulting in death or the loss of a limb. "When you pick them up, they'll want to take your finger off right away," Wilson said. These two- to three-inch long creatures were collected from the creeks on the sand islands off southeast Queensland. Crayfish are freshwater creatures, while lobsters are marine animals. The bluffing finding emerged when the scientists randomly pit 32 adult male crayfish against each other, two at a time, in plastic aquariums. They recorded how often competitive bouts led either to chases or fights. The crayfish were taken out after 10 minutes, to prevent any serious harm. "It felt more like watching sport than doing work," Wilson told LiveScience. "It did seem like we were setting up boxing matches." Squeeze this Wilson and his colleagues also investigated how strong each claw was by getting crayfish to squeeze metal plates in a custom-built sensor. "When you present them with the sensors, they're so aggressive they'll squeeze them as hard as they can, which is luckily what you want to test their strength," Wilson said. Claw size most often determined which crayfish won—if the claws of one crayfish were significantly larger than another's, the other would simply turn and run. "Like most animals, the size of their weapons seemed to determine everything in these crayfish," Wilson said. Pincers reached up to a third of the length of each combatant's body. However, larger claws were not always the strongest pincers, suggesting these weapons are most often used for intimidation rather than combat. "When the claws of each crayfish are roughly the same size, then whoever's stronger prevails," Wilson said. The team's results are detailed in the August issue of the journal American Naturalist. "Such dishonesty is probably more common in nature than most researchers now think," Wilson said. But rooting it out in other creatures might prove difficult. "If such dishonest signals are hard for other competitors to detect, they will be very hard for researchers to detect," he said.