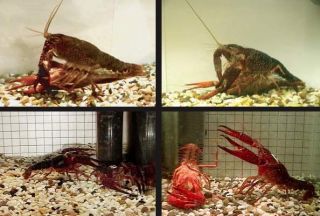 Scientists have discovered pseudo-sex in crayfish, where males fake sex with each other to show dominance and reduce violence. Without it, these males often killed each other [image].

The use of "pseudocopulation" to establish hierarchies and ease aggression among males is also seen in mammals such as primates. This is the first time scientists have seen such a complex dominance ritual outside vertebrates.

Neuroethologist Donald Edwards of Georgia State University in Atlanta and his colleagues investigated Louisiana crayfish in a lab aquarium. Scientists had seen pseudocopulation between males in the wild and in captivity, but why this happened was unknown.

Normally a male crayfish begins sex by approaching a female from behind and lashing her with his antennae. Next he climbs atop the female and flips her over. If the female adopts a subordinate pose with outstretched limbs, the male grasps her and begins copulation for 30 to 90 minutes.

In pairs that pseudocopulated, initial levels of aggressive behavior between the males—such as claw attacks or offensive tail flips— declined significantly during the first hour of interaction. All these animals survived over the first 24 hours.

However, in the male pairs that did not pseudocopulate, initial levels of aggression did not slack off during the first hour. Half of the subordinate males were killed, dismembered and partially eaten during the first 24 hours.

This suggests pseudocopulation helps establish a pecking order between males to cut down on battles between rivals.

"Universally, aggression or its threat is used to set up and maintain dominance rankings within a population of animals. Aggression, however, is dangerous for both dominant and subordinate, so many animals try to discover ways to avoid it," Edwards told LiveScience.

Edwards and his colleagues will report their findings in the Nov. 21 issue of the journal Current Biology. In the future, Edwards noted research could investigate whether female crayfish also pseudocopulate with each other.