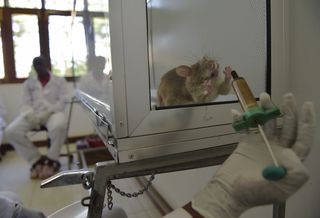 In fact, not only can they smell it, but they're also significantly better at sniffing out the illness than existing tests that doctors use to test for the disease in children. Current pediatric tuberculosis (TB) tests have a sensitivity of just 30 to 40 percent, meaning that if a doctor tests a child sick with TB for the disease, there's just a 30 to 40 percent chance that the test will return a positive result.

But add in a sniff from a trained rat, according to a paper published April 4 in the journal Pediatric Research, and the sensitivity of the test jumps by nearly 40 percent.

That's a big deal, because while TB is very difficult to test for in kids, it's still a major cause of death worldwide and is difficult to treat unless caught early. Of the 1.3 million people who died in 2016 of TB, the researchers wrote, 130,000 were children, many in sub-Saharan Africa. It's hard to test for TB, they wrote, because young kids have trouble producing enough sputum (a mixture of mucus and saliva) to culture the bacteria, or grow a sample of it to test it. [27 Devastating Infectious Diseases]

(While the TB test has a low sensitivity, it does have a high specificity. That means that if someone does have a positive test result, they almost certainly really have TB and not a different disease, which isn't the case for all medical tests.)

The researchers, based in Tanzania and Mozambique, decided to do the study after hearing stories of certain lung diseases having strong, identifiable smells. So, they trained African giant pouched rats (Cricetomys ansorgei) to sniff out certain compounds produced by TB. Then, the doctors rode motorbikes around to local hospitals, collected sputum samples from patients and evaluated how the sniff test improved the results.

Unfortunately, the paper didn't report exactly how the rats were trained to identify the smell of TB. But the study did note that they were rewarded with food and given wheels to play on in their downtime.

The 40 percent increase in sensitivity made a big difference for patients. The researchers reported that after existing TB tests detected the disease in 34 children ages 1 to 5, the rats detected an additional 23 cases (all later confirmed by repeating, in some cases several times, the sputum test). Similarly, when existing tests caught 94 cases of TB in kids ages 6 to 10, the rats caught an additional 35 cases. In adolescents, the existing test caught 775 cases, and the rats added 177. In adults, the existing tests caught 7,448 cases, and the rats added 2,510 confirmed TB cases.

In other words, the rats became less useful as the patients got older, but in every age group, the rodents significantly improved upon existing tests.

This isn't the end of the road for this line of research. The authors of the paper wrote that more research is needed to determine just how sensitive rats' noses are to TB and how best to deploy the animals.