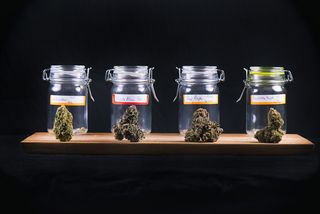 The success of medical marijuana at alleviating chronic pain could make it a strong contender for chipping away at the American opioid epidemic.
(Image: © Shutterstock)

Rates of opioid prescriptions went down in states that implemented laws allowing access to medical marijuana, according to two studies published today (April 2) in the journal JAMA Internal Medicine.

The findings suggest that access to medical marijuana may have cut patients' need for opioids to manage their pain, the researchers said.

"There has been substantive evidence that marijuana can relieve pain at a lower risk of addiction than opioids and with virtually no risk of overdose," said lead study author Hefei Wen, an assistant professor of health management and policy at the University of Kentucky College of Public Health in Lexington, Kentucky. "The potential for marijuana policies to reduce the use of addictive opioids deserves consideration, especially in states that have been hit hard by the opioid epidemic." [25 Odd Facts About Marijuana]

In one of the studies, Wen and her colleague Jason M. Hockenberry, associate professor of health policy at Emory Universtiy in Atlanta, analyzed rates of opioids prescriptions during 2011 and 2016 for Medicaid enrollees — a population that has a a relative high risk for chronic pain and opioid addiction, Wen said. They found that the rates of opioid prescribing in states that had legalized medical marijuana dropped by 5.9 percent annually, on average. What's more, states that widened access further, by legalizing the recreational use of marijuana, saw a 6.4-percent annual decrease, on average.

In the second study, another team of researchers looked at the number of opioid prescriptions filled under Medicare in all U.S. states from 2010 through 2015. Studies suggest marijuana use is rising fastest among older Americans—a group that's also most likely to have the type of pain conditions that respond best to marijuana, the researchers said. Opioid prescriptions fell by 2.21 million daily doses per year, on average, in states that legalized medical marijuana — an 8.5-percent decrease — compared with opioid prescriptions in states that didn't legalize the drug.

Studies show that cannabinoids — chemical components in Cannabis plants — can be effective in alleviating some kinds of pain, and "a mountain of anecdotal evidence from patients" suggests that some who turn to medical marijuana for chronic pain end up needing fewer opioids, said Dr. Kevin Hill, an associate professor of psychiatry at Harvard Medical School who was not involved with the studies.

"And now, with these two papers, plus a handful of previous studies, we've got pretty compelling evidence that shows that we need to really to think about cannabis as a potential way to curb the opioid crisis," said Hill, who co-authored an editorial that was published alongside the two studies in the same journal.

Opioids are a class of strong pain medications, including drugs such as OxyContin (oxycodone) and Vicodin(a combination of hydrocodone and acetaminophen). Opioids bind to opioid receptors in the body and cause feelings of euphoria. They are highly addictive, and can lead to drug abuse, severe complications and overdose deaths. The number of Americans dying from opioid overdoses continues to rise; there were more than 42,000 U.S. deaths from this cause in 2016, up from 33,000 deaths in 2015, according to a March 30 report from the Centers for Disease Control and Prevention.

Most people, including teenagers, with an opioid-use disorder start out with a legitimate prescription for the drugs from health care providers for pain management. Marijuana may be an alternative to consider for some of these patients, experts say; the cannabinoids in the drug bind to the body's cannabinoid receptors, which are part of an internal pain-relieving system.

Still, it may not be possible to replace all kinds of pain medications with marijuana. So far, clinical studies suggest that marijuana is effective in easing chronic pain, neuropathic pain (pain caused by damage to the nervous system), and involuntary and continuous muscle contractions associated with multiple sclerosis, Hill told Live Science. But to know whether marijuana is as effective for other types of pain, more research needs to be done, he added. [Could We Beat the Opioid Epidemic by Easing Pain with Marijuana?]

What's more, studying prescription data from states can only reveal a correlation between medical-marijuana laws and a reduction in opioid use; it can't show a cause-and-effect relationship, Hill said. Future studies should take a closer look at the link by performing randomized clinical trials to see the effects of taking marijuana for pain or following patients to see if marijuana helped them avoid opioids altogether or only lower their use.

Marijuana alone cannot fix the country's opioid problem. "It is but one aspect of a comprehensive package to tackle the epidemic," Wen told Live Science. Other essential strategies include providing appropriate pain management and various nonopioid and nonmedical alternatives, as well as improving access to addiction treatment, she said.