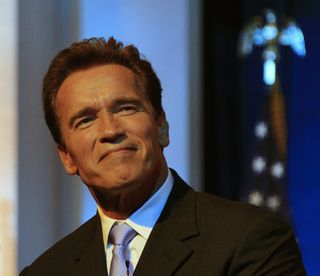 Arnold Schwarzenegger swearing in as governor of California in 2007.
(Image: © Joe Seer/Shutterstock)

Actor and former California Gov. Arnold Schwarzenegger underwent heart surgery this week and is now in stable condition, according to news reports.

Schwarzenegger, who is 70, was scheduled to have a procedure yesterday (March 29) at Cedars-Sinai Medical Center in Los Angeles to replace his pulmonic valve, Daniel Ketchell, a spokesperson for the actor, told The Washington Post. The pulmonic valve (also known as the pulmonary valve) is the valve of the heart that helps regulates blood flow from the heart to the lungs, according to the American Heart Association.

The actor previously had a heart-valve surgery in 1997, to correct a valve defect he was born with.

"That 1997 replacement valve was never meant to be permanent, and has outlived its life expectancy," Ketchell said. For this most recent surgery, Schwarzenegger opted to undergo a "less-invasive catheter valve replacement," Ketchell said, possibly referring to a type of procedure in which doctors thread a thin catheter through a vein to the heart and use the catheter to deliver the new valve. [9 New Ways to Keep Your Heart Healthy]

However, during this less-invasive procedure, Schwarzenegger may have experienced a complication that required emergency open-heart surgery, according to TMZ.

Ketchell confirmed to The Washington Post that an open-heart surgery team was on hand during Schwarzenegger's procedure "in case the catheter procedure was unable to be performed," Ketchell said.

Schwarzenegger previously said he was born with a bicuspid aortic valve, in which the aortic valve has only two flaps, instead of the typical three. The 1997 procedure was aimed at fixing this problem. Details of that procedure were not released, but it was reported at the time that Schwarzenegger had a valve transplant made from his own tissue, rather than a mechanical valve. If that's the case, Schwarzenegger may have undergone an operation known as the Ross procedure, in which the aortic valve is replaced with the patient's own pulmonary valve and the pulmonary valve is, in turn, replaced with a donor valve from a cadaver.