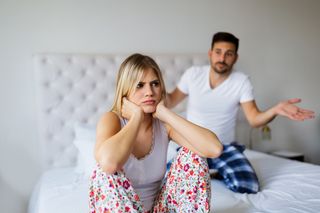 For women who think that men just don't seem to understand, well, you're right: Men really are less empathetic than women, and a new study from England offers clues about why this might be the case.

Empathy is the ability to recognize and relate to what’s going on in another person’s mind, but scientists still know very little about what makes some people more attuned to someone else’s feelings than others.

In the new study, published yesterday (March 11) in the journal Translational Psychiatry, the researchers turned to genetics for an answer. To do so, they combed through data on nearly 47,000 people who had used 23andMe, an at-home DNA testing kit, for links between how well they performed on an empathy test and genetic variatons. (23andMe's research team was involved with the study.) [10 Things You Didn't Know About You]

The researchers found that, although women scored, on average, 10 points higher in the "Emotional Quotient" (EQ) test than men, there doesn’t appear to be a genetic basis for those differences, said lead study author Varun Warrier, a doctoral student in neuroscience at the University of Cambridge in England.

In the study, the researchers looked for variations in a single building block of DNA, the nucleotide. These variations, called single nucleotide polymorphisms, or SNPs, are the most common type of genetic variation. An example of an SNP would be the nucleotide cytosine (C) randomly replaced with the nucleotide thymine (T) in a certain stretch of DNA, Warrier explained.

With genetics out of the equation, it's not clear why men have less empathy than women do, Warrier said.

"We know that there are strong social factors that shape how empathetic we are or how we perceive ourselves to be empathetic," Warrier said, adding that traditionally, society has higher expectations of female children to be understanding of others' feelings. However, non-genetic biological factors could also play a role.

"Biologically, there are differences between men and women — things like hormones and hormone levels," he said. "It could be possible that some of these hormones that are present in greater levels in women can drive some of the higher empathetic scores."

Oxytocin, which is found in higher levels in women, can make people more empathic, while testosterone, present in higher concentrations in men, could do the opposite, Warrier said.

He also noted that the current study only looked at the contribution of SNPs, but there are other types of genetic variations that could also play a role, and more research is needed. Previous studies on identical twins, for example, suggest that genes account for about 30 percent of a person's overall empathy.